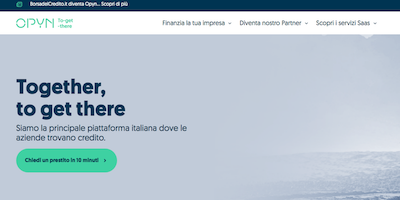 Italian fintech scaleup Borsa del Credito rebranded as Opyn (see here a previous post by BeBeez). The Italian credit marketplace aims to expand its activity to the field of lending as a service (LaaS) for financial services firms based in Germany, The Netherlands and Scandinavia.  Sources said to BeBeez that Opyn aims to open subsidiaries abroad, sign partherships with local firms, but may also carry on acquisitions. Since starting its lending activity in 2015, through the Borsa del Credito platform loans for a total of 150 million euros were issued, of which 75 millions just in year 2020 (see here the Fintech Platforms BeBeez Report 2020 available for the subscribers to BeBeez News Premium and to BeBeez Private Data). In H1 Opyn had then issued other 154 million loans, ceo Ivan Pellegrini said, adding that its aim is reaching 500 millions by the end of 2022. Antonio Lafiosca, Alessandro Andreozzi and Mr. Pellegrini founded Opyn in 2013. The company belongs to P101 (30%), GC Holding (15%), Banca Valsabbina (8,3%), the managers (in the region of 10%), Azimut, and other minority shareholders (in the region of 5% each). The financial investors may exity through a listing of Opyn.

London-based nuclear energy startup newcleo raised 118 million US Dollars and attracted the resources of Club degli Investitori (2.3 million euros), LIFTT and Exor Seeds, the venture capital unit of Milan-listed Exor, the investment holding of the Agnelli family (see here a previous post by BeBeez). Stefano Buono is the ceo of newcleo, Luciano Cinotti the chief scientific officer, Elisabeth Rizzotti is the coo and ceo of the Italian research activities. Italian Nobel laureate Carlo Rubbia reportedly supported newcleo. The company will invest the raised proceeds in the realization of its proprietary projects and M&A transactions.

CRIF, a leading Italian provider of services for business and credit information and of digital solutions for business development and open banking, invested in Hong Kong’s Know Your Customer (KYC) (see here a previous post by BeBeez). Paola Galassi, CRIF’s Executive Director of B2B Services, will join the board of Know Your Customer. Claus Christensen, Cormac Doddy, and Richard Barrett founded KYC in 2015. The scaleup already had raised 5.4 million US Dollars since its foundation and attracted the resources of Swiss fintech accelerator F10 and of Asian investment bank CLSA which poured one million in the business on the ground of an enterprise value of 11 million

RIC3D, a benefit company that Techinnova incubated, aims to raise 150-500k euros through an equity crowdfunding campaign on Milan-listed CrowdFundMe (see here a previous post by BeBeez). The company’s pre-money value amounts to 4.9 million euros.  Clara Bernasco and Riccardo Roggeri founded RIC3D in 2018.  The company’s shareholders aim to exit in 2025 through a sale to a financial investor or a trade buyer. RIC3D has sales of 0.178 million euros and will invest the raised proceeds in its commercial development.

In 1H21, Inventis, an Italian producer of medical devices in which Innovative-RFK invested, generated sales of 7 million euros with an ebitda in the region of one million (see here a previous post by BeBeez). Synapsys, a company that Inventis acquired in early 2020, increased its turnover by 15%. Massimo Martinelli, Stefano Fante and Massimo Ferraresso founded Inventis in 2005 and sold a 30% to Innovative-RFK in 2018

ALIcrowd, an Eltif that invests in crowdfunding campaigns managed by Azimut, will pour resources in Pharmercure which started to raise resources on Mamacrowd (see here a previous post by BeBeez). By the end of October, Pharmercure aims to raise 1.09 million euros and already attracted 1.05 million on the ground of a pre-money of 6.39 million. In November 2019, the company sold a 19% to Reale Mutua Assicurazioni.

HomesToPeople, an Italian proptech, rebranded as Kaaja after having raised 1.5 million euros from Club degli Investitori and Sensible Capital (see here a previous post by BeBeez). Kaaja appointed Silvia Rovere (the owner of Sensible Capital) as co-ceo and Paola Bruno and Maria Teresa Rangheri as directors. The founders Dario Cardile and Paolo Castelletti will keep their roles of ceo and head of marketing. Kaaja will invest such proceeds in its organic development.

GAM Cosmetics, a startup that provides professional hair care products, raised 100k euros for the launch and development of its new luxury brand meOro (see here a previous post by BeBeez). GAM aims to generate sales of 4 million euros thanks to meOro by 2024. The project attracted the resources of entrepreneur Costantino Bianchi Maiocchi, who acquired a 20% stake and will act as director together with the ceo Andrea Pampuri, Maximo Perez Cano and Guido Bottazzi.