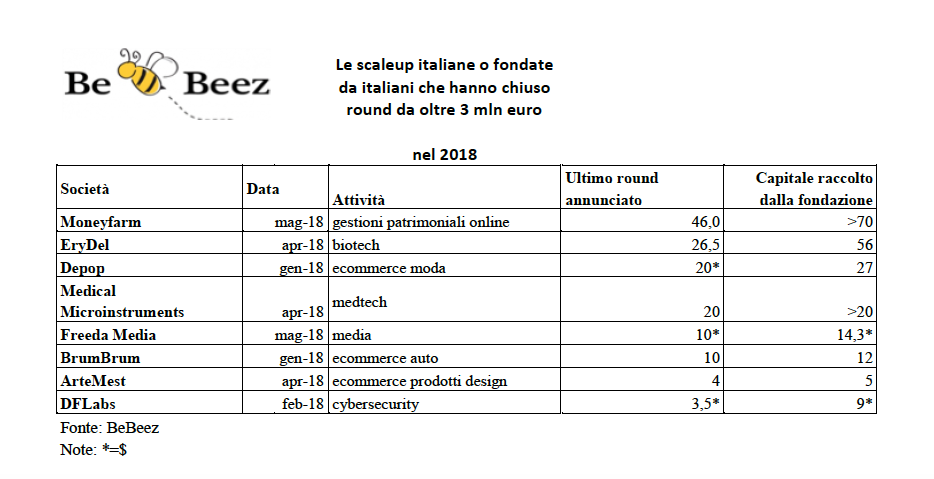 Moneyfarm, an Italia scaleup company founded in 2011 by Paolo Galvani and Giovanni Daprà and an online leading asset management advisor for retail investors, announced a record 46 million euros funding round which takes to over 70 million euros the total of capital raised from investors since the company started its activity (see here the press release).

Coming back to Moneyfarm’s last round, this was led by some of its previous investors or Allianz Group, through Allianz Asset Management, after Allianz Venture had invested 7 million dollars in September 2016 (see here a previous post by BeBeez), and Italia venture capital firm United Ventures and UK venture capital firm Cabot Square, both having led in 2015 a 16 million euros round in Moneyfarm (see here a previous post by BeBeez). In this last round new investors joined or  venture capital firm Endeavor Catalyst and Italy’s banking foundation Fondazione di Sardegna. Previously, in February 2014, Moneyfarm cashed in 700k euro by  Vittorio Terzi (a McKinsey’s director emeritus), while the seed round was in 2012 by United Ventures and Principia sgr, investing a total of 2 million euros.

The new cash will be used to further expand the company’s business on an international basis. Moneyfarm blends world-class technology with human expertise to make investment advice accessible to those who have been traditionally unable to invest, whether that’s because they lack the experience, are time-poor, or don’t want to pay the expensive fees of traditional financial advisors. Moneyfarm is one of the few European digital wealth managers to provide regulated investment advice alongside low-cost ETF-based investments.

Since expanding into the UK in 2016, Moneyfarm has seen impressive growth. With over 27,000 active investors, assets under management has jumped by 225% while the company counts a team of 90 professionals. Moneyfarm also announced last October the acquisition of the London-based startup Ernest, an artificial intelligence fed personal banker founded in 2016 by three Italian software developers (Cristoforo Mione, Lorenzo Sicilia and Niall Bellabarba) (see here a previous post by BeBeez).

A competitive auction is starting for bakery company Forno D’Asolo