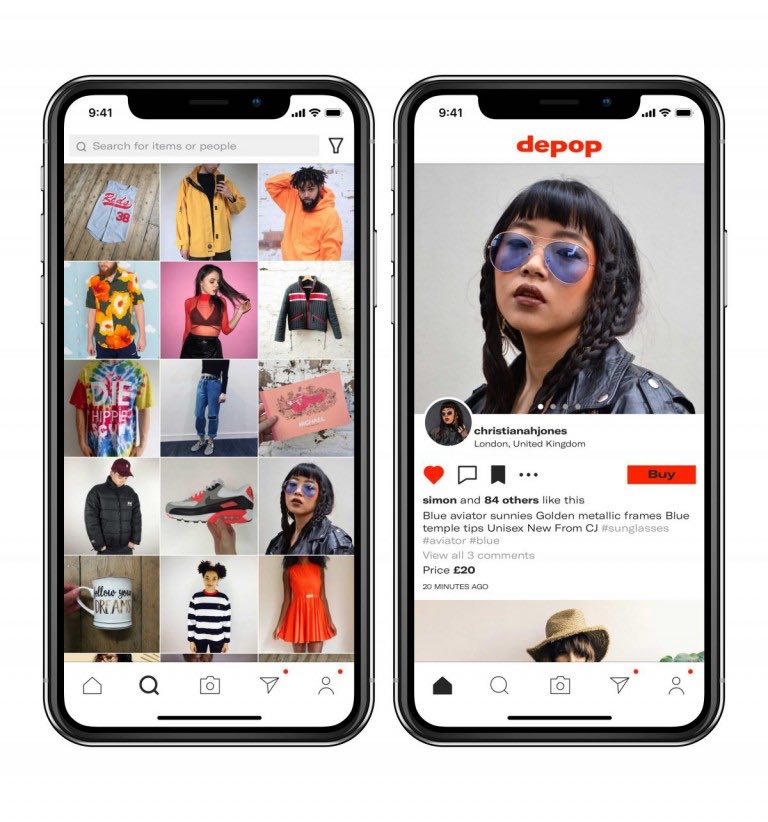 The Italian social shopping app Depop closed a 62 million dollars round, led by US private equity fund General Atlantic. The round was also signed by the current investors HV Holtzbrinck Ventures, Balderton Capital, Creandum, Octopus Ventures and TempoCap, together with the investor Sebastian Siemiatkowski, co-founder and managing director of the Swedish fintech company Klarna (see the press release here).
The funds raised will be used to triple US users, who currently are 5 millions and expand the developers team in London to implement new tools and features. Maria Raga, Depop’s managing director, explained: “We are working with different brands and soon I will be able to reveal some partnerships. From the product point of view we want to improve the platform in terms of conversions”.
The round comes after a row of five other rounds, for a total of 105.6 million dollars raised. Of this total, 20 million dollars were raised in a round in January 2018, signed by the new investor Octopus Ventures, as well as some of the previous shareholders: the venture capital funds Balderton, Creandum, HV Holtzbrinck Ventures, Red Circle Investments and Lumar (see here a previous post by BeBeez). The latter had already invested 7.4 million dollars in Depop in September 2016 (see here a previous post by BeBeez).
On the occasion of the January 2018 round, H-Farm, the innovation platform listed in the Aim Italia segment, had sold a first part of its stake in Depop, obtaining a cash return equal to a multiple of about 5x the initial investment, and then sold the remaning part last January, generating an income of 2.59 million euros and a capital gain of 2.5 millions. The deal as a whole for H-Farm has generated a return equal to 6x the initial investment, with a total income of 4.57 millions and a capital gain of 3.78 millions (see here a previous post by BeBeez).
Depop was born in 2011 in H-Farm from an idea of ​​Simon Beckerman. The startup allows anyone to buy and sell directly from their smart phone, create their own store, follow interesting people and make unique purchases. About 90% of Depop’s active users are under 26, and one-third of young people aged 16-24 in the UK are registered on the platform. The average user of Depop opens the application several times a day to see new content, create networks with other users and buy and sell. Members of his community follow and exchange messages 85 million times a month. Depop today has a community of users ranging from the most stimulating creative to the new influencers of fashion, design, art and music from around the world, such as the Italians Chiara Ferragni and Bianca Balti.
The Depop team is divided between the offices in London, Milan, New York and Los Angeles, which has become the second largest city by number of registrations after the English capital. Since 2012 Depop has its headquarters in Shoreditch, in the technological district of London. Since 2011, more than 19 million transactions have been carried out on the app for a total value of more than half a billion dollars (about 442 million euros). Depop boasts 13 million users globally and revenues of $ 50 million, up 100% year-on-year.