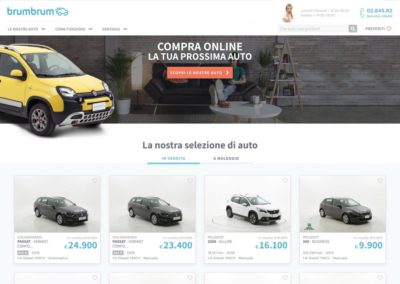 brumbrum spa, the Italian e-commerce platform for used cars, 0 km and long-term rental, closed a 65 million euros securitization  to finance the purchase of cars offered on the platform and at the same time announced the entry of the DIP Capital as new equity investor (see the press release here).

On the latter front no details have been disclosed, but sources told BeBeez that DIP Capital had entered brumbrum capital last Spring 2020 with a 3 million euros investment but the deal was not announced at the time. Moreover some months ago brumbrum’s founders also bought back the stake that seed investor Alberto Genovese owned as he is facing personal criminal allegations. In the same way, in fact, we recall that the controlling stake of Prima Assicurazioni is on the market, which also belongs to Mr. Genovese (see here a previous article by BeBeez).

Going back to detail of the financing deal, the securitization vehicle brumbrum Rent spa was set up and issued 50 million euros of senior abs which were subscribed by funds managed by Oaktree Capital Management and P&G sgr, assisted by Phinance Partners as financial advisor and by Hogan Lovells law firm as legal advisor; and 15 million euros of junior abs that were subscribed by the same brumbrum which also plays the role of portfolio manager of the operation.

Banca Finint, in addition to having guaranteed support in the implementation of the transaction, holds the role of master servicer, corporate servicer, representative of noteholders and computation agent, while Agenzia Italia is the back-up portfolio manager. Alantra Credit Portfolio Advisory, as sole financial advisor, and the law firm Orrick, Herrington & Sutcliffe, as legal advisor, structured the transaction for brumbrum.

This is the first operation in Italy with registered movable assets as a securitisation collateral and among the first in Europe. The operation takes advantage of the novelty provided by art. 7, paragraph 1, lett. 1-bis and 7.2 of Law 130/1999, which allows for the structuring of securitisations which have as underlying assets registered real or movable assets and real or personal rights relating to the same assets. We recall that that provision of the rule was first introduced by the 2019 Budget Law in paragraphs 1088 to 1090 and then better specified by the so called Growth Decree (Law Decree 30 April 2019, n.34) which made further changes to Law 130/1999 (see here a previous article by BeBeez). Since the beginning of the year, various securitization transactions of real estate have been recorded in Italy (see here a previous article by BeBeez), but never before has the new rule been exploited for securitization structures on registered movable assets such as cars.

brumbrum was founded in 2017 by Francesco Banfi (former partner of McKinsey & Company where he was head of the Emea Digital Service Line division for the Tmt sector) and Roberto Testore (engineer with over 30 years of experience at the helm of numerous large industrial groups between such as Fiat Auto, Finmeccanica and Trenitalia), as well as, as mentioned, by Alberto Genovese.

Today brumbrum, which employs a total of more than 120 employees, is present on the Italian market through the Reggio Emilia Factory. It is a plant of 50,000 square meters, divided between the production area, the storage area, offices and commercial spaces, where the logistics teams and mechanics involved in the process of selecting and upgrading the cars operate, and the Milan offices where the teams work. tech, marketing, sales, purchasing and pricing. The online platform offers two different mobility proposals: the purchase of used cars or cars at 0 km and long-term rental for individuals.

Mr. Banfi, ceo of brumbrum, declared: “brumbrum can now continue the commercial development of its offer by adding a long-term rental product for individuals to the Used product, establishing itself as the main Italian online channel in the automotive sector”.

(Article modified on June 23rd at 8.30 am – It is specified that DIP Capital had invested in 2020 and that brumbrum founders bought back Alberto Genovese’s stake)