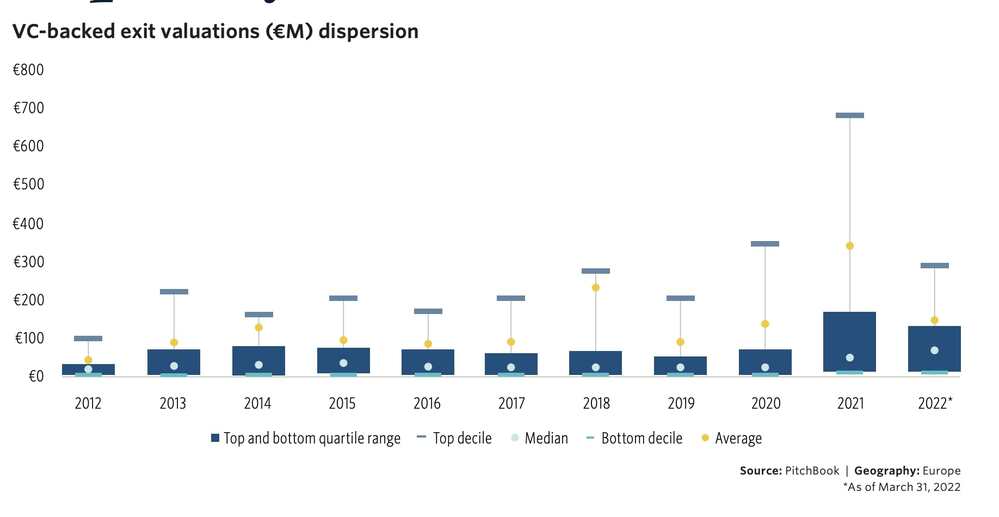 With the pandemic now over, the focus has shifted to the true economic cost of the past two years and how post-economic growth can be driven. After several rounds were completed and exits were accelerated to capitalize on short-term growth from increased online usage and shifts toward digitization in 2021, 2022 has been characterized by uncertainty from macroeconomic volatility. It is believed that VC stakeholders feel growth may be harder to come by now. Major economy interest rates have risen which could officially be signaling the end of cheap capital that has underpinned the past private market boom. Also, inflationary pressure, trade tensions, and the war in Ukraine have also created massive challenges for European individuals, companies, and governments reliant on globalization.

There are many reasons for the drop-off in valuations that we have seen, which include, but are not limited to geopolitical tensions, inflation, interest rate hikes, and the pandemic. Each of these factors provides unique challenges to startups who are seeking to maintain the normal valuation levels. One of the biggest issues is the flexibility and amount of change that each of these challenges brings. If you look more specifically at geopolitical tensions, it is impossible for either a startup or an investor to gauge what impact the Russia-Ukraine conflict could cause on the business. This leads to three things happening, the first is a lower valuation for the startup, the second is that investors may be timider to invest, and finally, the fact that investors may not receive the buy-out amount or return that they had initially expected when they had invested earlier.

Inflation is also playing a massive role in causing these valuations to fall and for investors to be unable to seek the same returns that they were wishing they would have. This is even the case for massive VC investors such as SoftBank and Tiger Global. These two companies have combined lost well over 40 billion dollars due to changing regulations and the unpredictability of inflation.

Investors are also finding it difficult to achieve the targets that they had set due to the changing motivations for startups. In the past, the focus had been more on developing a unique, stable product that the market had a niche for. However, this has shifted, and startups are now much more focused on valuations and attaining a “unicorn valuation”. What used to be an elite group of billion-dollar valuation companies has now turned into something much more common: from 2020 to 2021 there was a 120% increase in the number of unicorns that were minted. Now, there are more than a thousand unicorns in the world, with some even having revenue of less than a million dollars. This means that being a unicorn is no longer as important as it used to be, but investors are still equally as attracted to them based on the previous halo. This leads investors to be too bullish with their money and expect returns that may not necessarily be feasible.

This is why over-saturation of unicorn valuations has led to the creation of a new category of valuing a startup: a Centaur. Bessemer Venture Partners in a recent report focusing on the cloud market says that “the abundance of capital has created an environment where valuations have somewhat lost their meaning. The only thing we can truly conclude about a unicorn today is their ability to attract investor interest. In addition, we’ve seen how the unicorn birth rate has correlated to the rise and fall of public valuations. The unicorn-or-bust mentality has unfortunately driven many startups and investors to focus on valuation as their primary goal, instead of building a great business. Given these conditions, and the market correction, at Bessemer we know the VC and founder community are in need of a new milestone to strive for”. And this is the Centaur or “a business that reaches $100 million of annual recurring revenue (ARR)—a rare breed of cloud business, part of an elite subset of the growing unicorn herd. At $100 million ARR, Centaur businesses have product-market fit, scalable go-to-market strategy, and a growing customer base”. A concept that may be easily enlarged to many other tech sector relative to major scaleups.

Patrick Brennan and Will Kelly contributed to this article