bybebeez
in Data&Analysis, Private equity, venture capital and private debt data in Italy, Venture Capital
A A
Share on FacebookShare on Twitter 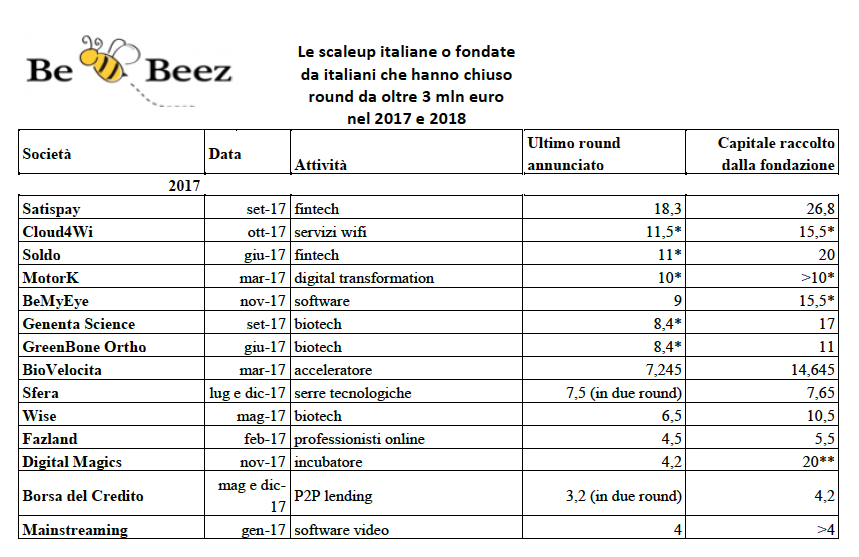 Those deals were actually 14, if you consider also a capital increase by Digital Magics, a venture incubator listed at Aim Italia since 2013 which used to be one of Italy’s first startups focused on investments in the digital sector in 2004 of which StartTIP, an investment veichle focused on scaleups and innovation by Tamburi Investment Partners, has now a significant stake.

All data come from BeBeez’s database and have been published last Saturday by  MF Milano Finanza.

These data show that a new trend was born in the venture capital market in Italy as more investors are focusing on the scaleup segment, aiming at supporting both former startups in their next stage of growths and  SMEs which are developing a disruptive technology able to completely change their traditional business model.

As for potential exits or as an alternative to a new round by venture capitalist, Euronext Stock Exchange is proposing Italian scaleups or tech SMEs to consider a listing in Paris, as Euronext’s markets have a strong track record in raising capital for tech companies: at the end of Aprile there were 357 listed tech companies which have been raising more than 10 billion euros since 2013.

So Giovanni Vecchio, Euronext’s director and responsible for the Italian market, is starting in Italy the TechShare program, a tutorial program for selected scaleups or tech SMEs aiming at preparing those companies to the equity capital markets.