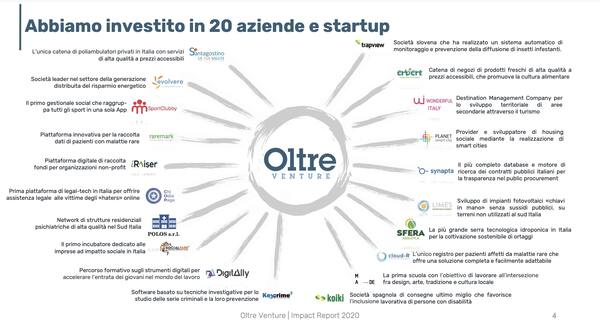 Oltre III, a fund that Oltre Impact launched, raised 72 million euros ahead of a final target of 100 million to hit by the end of 2023 (see here a previous post by BeBeez). Earlier in July, the vehicle attracted 10.7 million (5 million from Investcorp Tages Impact Fund) and a commitment of 8 million from Intesa Sanpaolo.

Italian listed utility A2A and Israeli’s tech investor SIBF signed a memorandum of understanding for the launch of a Tel Aviv-based innovation pole for investing in ecologic transition (see here a previous post by BeBeez).

Out Of, an innovative Italian startup active in the field of smart specs and smart lenses, attracted 0.712 million euros from a club deal that iN3 Ventures led and that Selected Investments joined as strategic investor (see here a previous post by BeBeez). Out of will invest the raised proceeds in its proprietary technology.

DIP Capital, an investor in European digital-tech scaleups, raised 10 million euros for DIP Fund I, that now has resources of 50 million ahead of the launch of a second fund in 2023 (see here a previous post by BeBeez). Riccardo Cirillo founded DIP Capital  in 2018. DIP Fund I received the sponsorchip support of private equity and renewable energy investor Platina Partners.

Cdp Venture Capital sgr -Fondo Nazionale Innovazione sgr (fka Invitalia Ventures) launched Extend, a national pole for the tech transfer in the biopharma sector (see here a previous post by BeBeez). CDP’s Fondo di Technology Transfer (a vehicle created in 2020 that Claudia Pingue heads and that has resources of 275 million euros) allocated 15 million for Extend and 40 million for investing in biopharma venture capital funds. Extend’s resources amount to above 23 million ahead of a target of 30 million. The firm also attracted the resources of Germany’s integrated drug discovery company Evotec and Angelini Ventures.