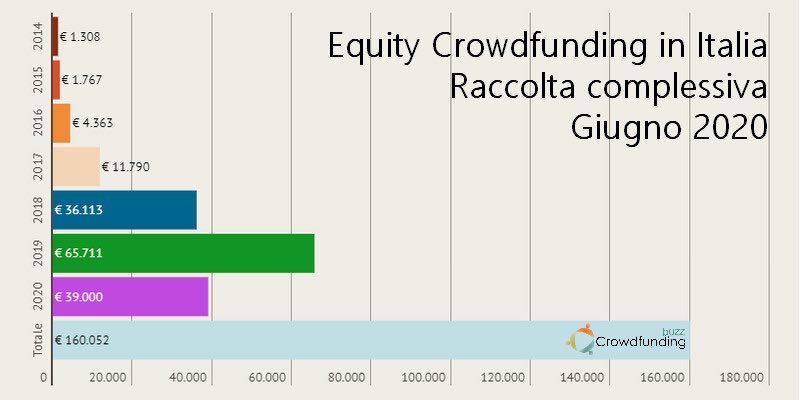 In the first half of 2020, equity crowdfunding in Italy raised 39 million euros (+ 40% compared to the same period of 2019 and even higher than the entire sector’s 2018 fundraising), through 67 campaigns, CrowdfundingBuzz says (a site published by EdiBeez srl as well as BeBeez). The campaigns had an average of 122 investors, with an average investment of 5,600 euros, slightly lower than the 5,800 euros in the first half of 2019. The average targets of each campaign increased: from 405k euros in 2019 to 582k euros in 2020. At platform level, the ones that have raised the most are: BacktoWork, CrowdFundMe (up 75%) and TwoHundred (+ 64%).
However, the figures for the half year are mainly influenced by the record results of the first quarter (over 24 millions), which in turn were influenced by the equity crowdfunding campaign concluded last March by Fin-Novia, with its 7.665 million euros raised, a record both at Italian and European level (see here a previous article by BeBeez). But even if we purify the data from this campaign, the first half of 2020 deposits amounted to 31.4 million euros, which is in any case higher than the figure for the same period in 2019. 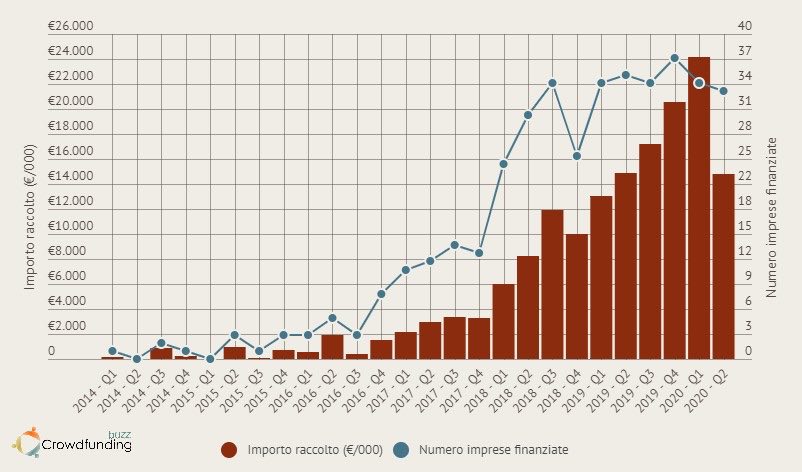 However, the data also attest to a decrease in the quarterly fundraising of equity crowdfunding compared to the most recent quarters. Although the second quarter of 2020 has raised almost the same amount as in 2019 (14.8 million euros), the trend compared to the most recent quarters is in sharp contrast: the quarterly data for the first time are decreasing compared to the previous quarter. An obvious consequence of the Covid-19 effect.
Finally, we report that in the first half of 2020 three new equity crowdfunding platforms debuted on the Italian market: MyBestInvest and Lifeseeder, which closed their first successful campaign last May (see here a previous article by BeBeez); and Forcrowd, which launched its first campaign last June (see here a previous article by BeBeez).