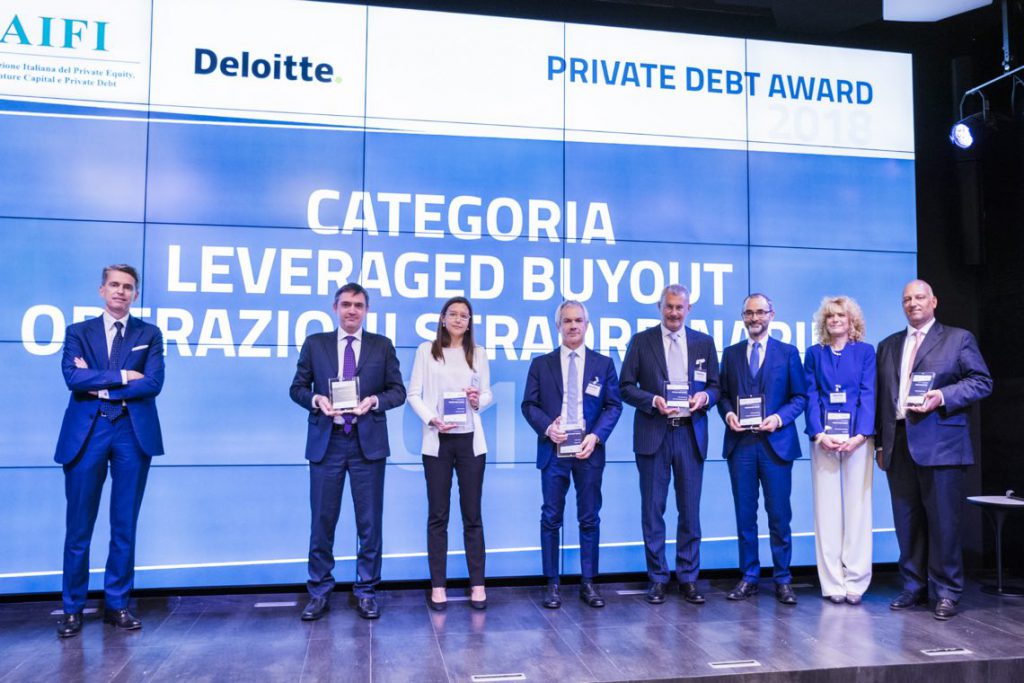 Antares AZ – Azimut Libera Impresa and Green Arrow, two Italian financial firms, received the Private Debt Award from Aifi, the Italian association of private equity and venture capital firms, and Deloitte (see here a previous post by BeBeez). Antares AZ received the award for the Development category and the entire subscription of the 4 million euros bond that De Cecco, an Italian pasta maker, issued along another 21 million euros issued which was instead subscribed by cassa Depositi e Prestiti and other investors. As for Green Arrow, the company received the award for the LBO category for partecipating at acquisition financing of the Italian chocolate cream producer Nutkao, which was bought by White Bridge Investments. The other lenders in the deal were banco Bpm, White Bridge itslef and Antares AZ1. According to BeBeez Private Data, Italian unlisted companies issued bonds for 8.8 billion euros in 2018 up from 7 billions in 2017 (the readers of BeBeez News Premium 12 months can download the BeBeez Private Debt Report 2018 here, find out here how to subscribe to BeBeez News Premium for just 20 euros per month and read the BeBeez Reports and Insight Views). The total number of smaller issues increased, even if in value has remained in line with 2017. In particular, BeBeez Private Data counted a total of 125 different issues, of which 18 with a size greater than 100 million euros for a total of about 7.9 billions (from the 5.74 billion of 2017 spread on 16 different emissions). As for direct lending, i.e. the direct financing to corporates by non-banks, here too the activity has recorded significant numbers: 753 million euros from fintech platforms, of which almost 62 million from foreign fintech platforms, and 6 millions from private debt funds active also in lending.

French financial investor Capzanine opened in Milan a bureau that Philippe Minard will head with the support of Riccardo Dore and Tommaso Galletta (all previously worked at Emisys Capital) (see here a previous post by BeBeez). Capzanine invests in businesses with an enterprise value of 30 – 400 million euros  for buying minorities or majorities or as private debt (mezzanine, unitranche, senior debt) provider.

At the end of 2018, Italian banks’ portfolios of Non performing exposure (NPEs) amounted to 180 billion euros (341 billion at the end of 2015), said Pier Paolo Masenza, Financial Services Leader of PwC, and Alessandro Biondi, co-head of Npl and distressed assets at PwC (see here a previous post by BeBeez). However investors have bought tons of NPEs in the last 3 years so up to now there are 202 billion euros of NPEs in their portfolios on top of 188 billion euros of NPEs in the Italian banks’ books for a total of 390 billion euros. Mr. Masenza said that in 2019 a consolidation of the servicer firms market could take place as well as an increase of the sales of UTPs. Biondi added that the portfolios that servicers handle is growing at an annual rate of 19%.

Intesa Sanpaolo is about to sell the NPEs of Banca Popolare di Vicenza and of Veneto Banca. Those loans are the ones that used to be performing when the bank led by ceo Carlo Messina bought the two distressed banks in 2017, but they had a high risk to become non performing. So part of the agreement back then was that those loans would be sold to SGA whenever they became non performing by the end of 2020 (see here a previous post by BeBeez). These first portfolio has a face value of 740 million  euros (612 million of net value) and include credits of retail borrowers or SMEs.

Illimity, the listed Italian NPEs investor, launched Neprix, its platform for NPL servicing, and announced the signing of a partnership with It Auction for trading goods given as collaterals (see here a previous post by BeBeez). Neprix will also work for third parties, and Andrea Battisti is its ceo. Andrea Clamer, head of Npl Investment & Servicing at Illimity said that these two operations allow Illimity to enlarge its business scope. Renato Ciccarelli is the founder of IT Auction.