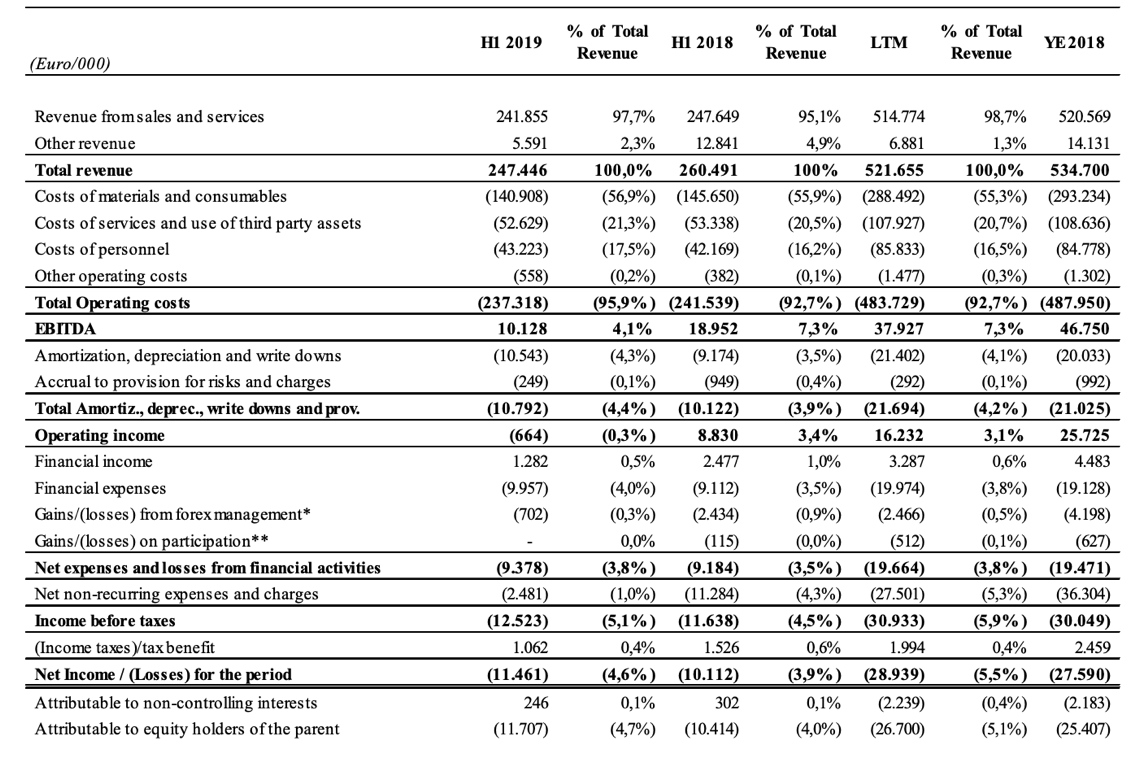 The Carlyle Group aims to acquire the bond that Italian diversified engineering group Officine Maccaferri issued on Milan market (See here a previous post by BeBeez). The 190 million euros liability pays a 5.75% coupon and is due to mature in 2021. The company issued the bond for 200 million euros in June 2014 and at the closure of trading of 25 November, Monday, its price was 87. Moody’s downgraded the rating to Ca1 lst August. Officine Maccaferri is part of Gruppo Maccaferri, who owns the following units: Officine Maccaferri, Manifatture Sigaro Toscano (tobacco), Sadam (food), Samp (industrial engineering), Seci Real Estate, Seci Energia (energy), JCube (Innovation hub). Maccaferri is working on a receivership plan for Seci holding (the vehicle through which the Maccaferri Family controls the group), Seci Energia, Enerray, Sapaba, Sadam, and factoring firm Felsinea Factor. The company aims to focus its strategy on more lucrative businesses such as Officine Maccaferri, Sigaro Toscano, and Samp. Gruppo Maccaferri has a turnover of 1.039 billion, an ebitda of 118 million and a debt of 750 million. The company’s main lenders are Banca Intesa Sanpaolo, Banca Imi, Unicredit, and Banco Bpm. The debt includes the bond of Officine Maccaferri and the 25 million bonds of Sampistemi. Officine Maccaferri has sales of 534.7 million, an ebitda of 46.8 million and net financial debt of 176.8 million. In August, Moody’s downgraded the bond from B3 to Caa1. Officine Maccaferri attracted in October an expression of interest from turnaround investor QuattroR. However, Maccaferri aims to focus on the sale of its energy assets that have a cumulated turnover of 250 million.

TUVRheinland Italia (TUVR) awarded the financial and treasury department of Italian publishing group Panini with a certification as a value-creating unit for the financial and credit processes as established by Prassi di Riferimento UNI/PdR 63/2019  a procedure standard that has been elaborated buy the Italian Association of corporate treasuries (Associazione Italiana Tesorieri d’Impresa – AITI) in partnership with UNI – Ente Nazionale Italiano di Unificazione (see here a previous post by BeBeez). Fabrizio Masinelli, the head of Panini treasury snnd also chairman of AITI, said to BeBeez that such a certification says that the company sticks to procedures that give the full control of its financial flows and is consistent with the alert systems that may signal 6 months earlier a situation of distress.

Industrial Cars, a dealer of Iveco and Fiat Professional that belongs to Gruppo Ceccato, issued a Vienna-listed 4 million euros minibond that a fund managed by Amundi sgr entirely subscribed (see here a previous post by BeBeez). The bond will mature on 31 December 2021 and pays a biannual rate of 2.2%. The proceeds will support the working capital of Industrial Cars and diversify the company’s sources of financing. Industrial Cars has sales of 94.85 million and an ebitda of 3.98 million.

The Sardinia Region allocated 2 million euros for the issuance of marble bonds in order to allow sector entrepreneurs to raise cash (See here a previous post by BeBeez). The Region will take as collateral the marble that the issuers have not yet sold. This initiative is similar to the pecorino cheese bond of 1.75 million that Cooperativa Allevatori Ovini issued in July 2018. The spv CheeseTake carried on the securitization of the bond through the issuance of asset-backed securities that Sfirs, the financial unit of the Sardinia Region, subscribed. In October 2019, CheeseTake carried on the securitization of a second issuance of pecorino bond. Sfirs and Mediocredito Centrale subscribed the ABS while Confidi Sardegna provided a warranty.

On 21 November, Thursday,  during the ALT-Finance Day (an event of which BeBeez is media partner), Innexta – Consorzio Camerale Credito e Finanza announced officially the launch of Innexta bond, a basket bond of Lombardy’s SMEs (see here a previous post by BeBeez). Earlier in October 2020, Innexta’s coo Danilo Maiocchi said that Innexta was going to launch soon the basket bond. The basket will group issuances worth 0.2-0.4 million euros each for a total amount of 5 – 10 million. Innexta is shortlisting the financial advisors for the placement of the bonds. The Chamber of Commerce of Milano Monza Brianza Lodi, together with Confidi and other trade associations may secure and subscribe the bonds as well as shortlisting the SMEs. According to a report of the School of Management of Milan Polytechnic University that Giancarlo Giudici presented during the event, Italian unlisted companies in the year from July 1st 2018 to June 30th 2019 issued a total of  884 bonds with a size not exceeding 500 million, for a total of 33.51 billion euros, while imiting attention to the issues by SMEs (the so called true minibonds) the report counted 433 issues for a value of 5.29 billion euros, for an average value of individual issues equal to 12.2 millions, with the first half of 2019 which saw a slight reduction in issues over the previous year, but with an increase in funding (307 million euros) made by a total of 279 issuers (for specific issues in 2019, BeBeez News Premium subscribers may download here the last BeBeez’s Private Debt and Direct Lending Report, discover here how to subscribe for just 20 euros per month).

Guber Banca acquired from Alba Leasing a 40 million euros face value portfolio of distressed credits (see here a previous post by BeBeez). The portfolio includes 604 leasing positions. Guber Banca will act as servicer for the management of the portfolio. After such a deal, the 1H19 Npl ratio of Alba will be of 14.7%, compared to the average market ratio of 21.6%. Alba Leasing belongs to BPM (39.19%), BPER Banca (33.50%), Banca Popolare di Sondrio (19.26%), and Credito Valtellinese (8.05%). Guber Banca acquired in January from Banca Valsabbina a portfolio of Npls with a face value of 150 million together with Barclays, while in March it acquired a stake of the junior tranche of the securitization of a 734 million portfolio of distressed credits that 22 banks of the group Cassa Centrale Banca originated and of which Värde Partners acquired the majority. Francesco Guarneri and Gianluigi Bertini founded Guber Banca in 1991 and in March 2017 they sold a 33.3% stake to Värde Partners. Guber, based in Brescia, has 9 billion of assets under management and has the fifth place in PWC’s league table for credit servicers.

Barbara Iacono is the new cfo of Gruppo Fire, a credit services company (See here a previous post by BeBeez). Iacono, born in 1975, is an Economics graduate at Bergamo University and previously worked as cfo at Call&Call Holding, an Italian business process outsourcing company and at WCMG (Working Capital Management Group), a credit management company that Vincenzo Pollani founded in Luxembourg. Alberto Vigorelli is the ceo of Fire and will be one of the panellists of Caffè di BeBeez, an event about NPLs and UTPs that will take place on 3 December 2019.