A 71% of the representatives of 250 European private equity operators interviewed in a survey made by Acuris Studios for PwC in late 2019, released in recent days, reported that 10% or more of their portfolio companies had breached one or more financial covenants on debt, versus only 51% of respondents in 2018. Not only that. All respondents’ portfolios had registred at least one company that breached at least one covenant.

A situation that has gone hand in hand with the slowdown in global economic growth, but which serves as a warning for what may happen this year, with the slowdown due to the shutdown due to coronavirus. And this is obviously because any drop in turnover leads to a reduction in ebitda and therefore to a worsening in relationships such as the NFP/ebitda ratio and debt service exoenses/ebitda ratio. And corporate debt, both in the form of high yield bonds and leveraged loans, in support of leveraged buyout operations, topped a huge amount and is now more and more at risk (see here a previous article by BeBeez).

Despite the high number of covenant breaches, the respondents of the PwC survey had said they were mostly (62%) satisfied with the development of the companies in the portfolios in 2019. A response that is similar to the one given by respondents to the last survey made by Preqin on a sample of 347 institutional investors globally last November 2019 and released in early March. In fact, those investors had replied, in a minimum percentage of 71% for each asset class, that the returns of 2019 had satisfied them. And in a minimum percentage of 77% for each asset class they said that they would maintain or increase their exposure in 2020 compared to 2019 and that even in the long term a minimum of 81% will maintain or increase its exposure to seize the opportunities offered now on the market from much lower ratings than before for target companies. 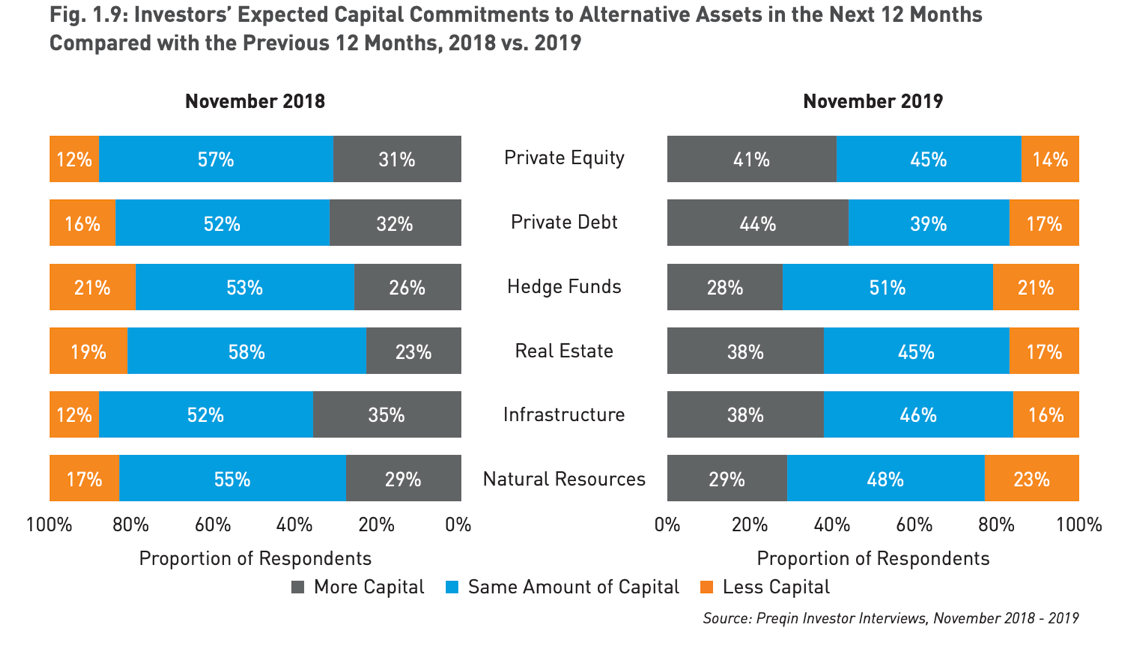 With this in mind, it will be necessary to understand what the funds will do this year for new investments. Certainly in the first place they will be in the trenches to support the companies in the portfolio, which will be an easy task as funds are still strong with a large amount of liquidity (see here a previous article by BeBeez).

Already on the occasion of the periodic survey of S&P Global Market Intelligence among 582 representatives of private equity and venture capital operators of the world, conducted at the end of 2019 but published last March 12, it had emerged that 44% of respondents believed that in 2020 there will be better prospects for the sector compared to 2019. But there was also a 20% of respondents who believed that the prospects would have been less positive and this was as a consequence above all of the tensions between the United States and China and less solid economic growth. In any case, however, 52% of the interviewees said they had plans to make new investments, in particular in the Information Technology (IT) (54% of respondents) and Healthcare (48%) sectors. By contrast, 22% said they would instead focus on managing the portfolio assets. On the divestment front, only 9% of respondents said they intended to sell assets in the portfolio in 2020.

Now, it is reasonable to think that most of the funds, if the survey were conducted these days, would answer that the priority is to support companies in the portfolio. But thanks to the huge liquidity available, in the second instance it will be able to put those capital in a position to take advantage of the most interesting opportunities at m&a level. And of course, funds dedicated to turnarounds and special situations will be in a privileged position.

As for returns, most institutional investors in alternative assets interviewed by Preqin expected net returns of between 8 and 13% by the end of 2019, regardless of whether they are private equity funds, private debt, hedge funds, real estate, infrastructure or natural resources. The survey also showed that a good 32% of respondents were aiming for returns of 14-19% for private equity funds and 8% pointing for 20% or more. Now perhaps those targeted returns will have to be re-modulated downwards, because exits are unlikely to be conducted this year and, by increasing the holding period, the Irr will be therefore reduced. Furthermore, banks will be less willing to offer leverage for acquisitions and therefore the funds will have to invest a greater share of equity than before. Having said that, on the other hand it is true that, as already mentioned, the incoming valuation multiples will be lower and that, replacing unwilling banks, the private debt funds will be ready to finance buyouts. So it is possible that these opposing forces are going to offset each other in someway, with the result that the performance will not undergo significant downsizing in the end.

Investing in ships: is it better a VLCC Tanker or a 5-year-old Capesize Bulk? Here are the results of the Vsl-BeBeez Shipping Equity Index