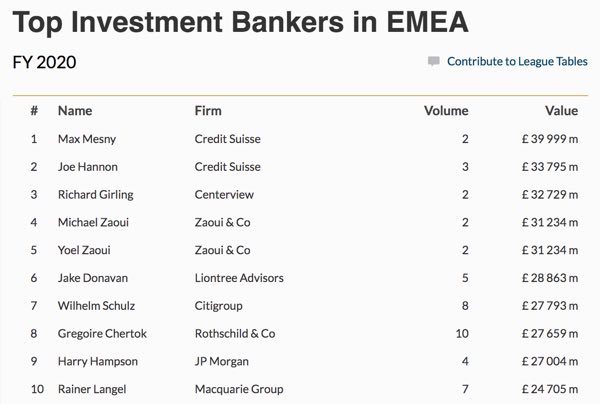 There are 5 Italians among the top 50 investment bankers advising private equity funds in European deals. This was revealed by the 2020 ranking drawn up by the data and services provider MergerLinks. They Italian top bankers are: Francesco Canzonieri from Mediobanca (25th); Fabio Palazzo of Rothschild & Co. (28th); Francesco Cardinali of JP Morgan (30th); Stefano Giudici of Nomura (39th); and Enrico Chiapparoli of Barclays (42nd).

Year 2019 was even better for Italian top bankers when the runner-up in the Mergerlinks’ ranking was Matteo Canonaco, co-founder in 2017 together with his former HSBC colleague James Simpson of the consulting boutique Canson Capital Partners, also second in the standings as well as Canonaco (see here a previous article by BeBeez).

In 2020, instead, Credit Suisse’s Max Mesny and Joe Hannon lead the ranking, followed in third place by Richard Girling of Centerview and in fourth and fifth place by Michael and Yoel Zaoui with their Zaoui & Co. But on closer inspection, there is however a bit of Italy also in the top-5 of the MergerLinks’ ranking.

Max Mesny in fact advised in 2020 on the merger between the Milan-listed paytech Nexi and the Danish electronic payment company Nets, active in the Scandinavian market and in the DACH region (Germany, Austria, Switzerland) (see here a previous article by BeBeez). The agreement provides for expected multiples EV/Ebitda to 2020 equivalent. Nets was valued  7.8 billion euros, therefore less than the 9-10 billions rumored about since last August 2020 (see Mergermarket here), equal to an equity value of  6 billion euros, based on an EV multiple of 20x 2020 ebitda, considering an estimated 2020 ebitda of Nets of 381 million (from 387 million adjusted ebitda in 2019, compared to 1.1 billion euros  in revenues). In addition, a potential earn-out of up to 250 millions is expected to be paid in 2022, in the form of new shares issued by Nexi to Nets shareholders, subject to the performance of Nets’ 2021 ebitda (at an implicit multiple significantly lower). The transaction will result in the largest pan-European paytech platform, with approximately 2.9 billion euros in estimated revenues and approximately 1.5 billion ebitda estimated on a pro-forma basis for 2020, including annual recurring synergies fully operational of 170 million euros, in addition to the 150 million euros of synergies already identified in the context of the merger between Nexi and SIA, the leading group in payment services and infrastructures, controlled by Cdp Equity  (see here a previous article by BeBeez).

We also recall that in 2019 Michael and Yoel Zaoui acted as consultants in the entry of Bpifrance into the then Fiat Chrysler Automobiles (FCA, now Stellantis after having concluded the merger with PSA), as well as in the acquisition of Esselunga by Marina Caprotti, then climbed to 100% of the company with his mother in April 2020 (see here a previous article by BeBeez). Richard Girling instead dealt with AstraZeneca‘s mega-acquisition of Alexion Pharmaceuticals which closed in December 2020 (see press release here).