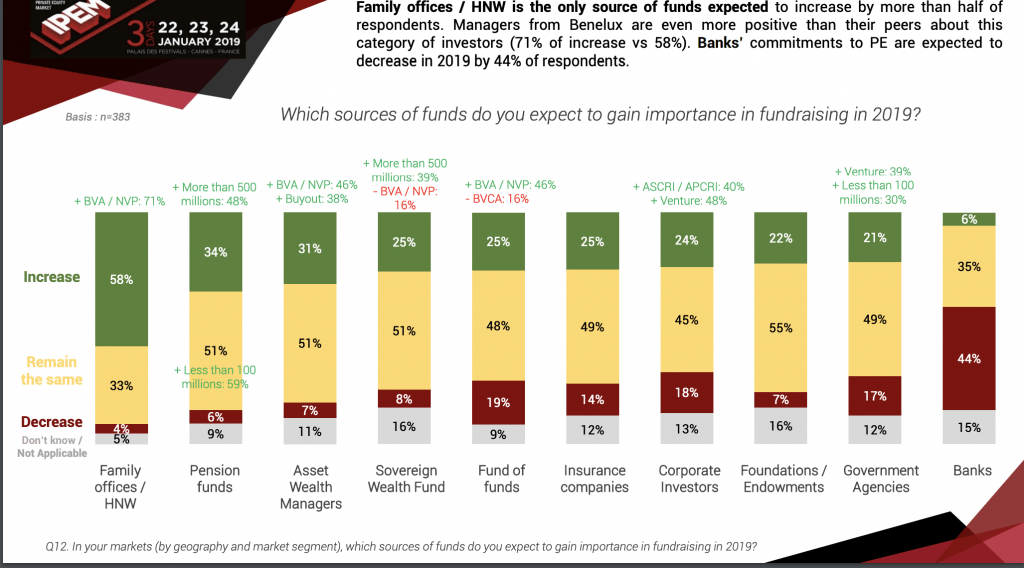 Even though financial markets will have a high volatility in 2019, private equity players have positive expectations for their portfolios and exits, an IPEM survey highlighted (see here a previous post by BeBeez). IPEM will hold an event at Cannes between 22 and 24 January, and BeBeez will present BeBeez Private Data. Antoine Colson, managing director di IPEM, said that 55% of pooled persons fears an economic downturn in 2019 as Brexit, protectionism and trade wars are the main threats for the global economic growth and volatility and turmoil of markets. However, for 2019, 83% of surveyed portfolio managers think that may arise opportunities for improving the portfolio assets; 73% of executives think that could carry on exits at good prices; 65% of market participants think also that fundraising may be fruitful for the private equity firms that are not based in the UK, but only 50% of European fund managers expect to raise more than they did for their last fund. On the investment side, 65% of managers expect to close new deals, while 61% of them expects to invest more than they did in 2018. According to 58% of surveyed managers, family offices and high net worth individuals (HNWI) will increase their holdings in private equity, while 44% of the pool expects banks to reduce their exposition to private equity.

In the Italian market there are 18,358 SMEs with revenues of 2 – 50 million of euros that have healthy financials, and therefore would be good targets for midmarket private equity firms (see here a previous post by BeBeez). A report that Leanus made for BeBeez said that 3,201 of these companies increased their revenues by 7% yoy, and generated 2.9% of Italian GDP posting aggregated sales of 169 billion (+24.21% yoy), an aggregated ebitda of 15 billion, an amount of banking debt of 17.7 billion, and cash of 21.6 billion. On average, the ebitda margin is of 8.96%, the total enterprise value is 105 billion.

Rekeep (former Manutencoop Facility Management), the Italian integrated facility management player, sold 95% of MFM Capital, the holding that owns the concessions projects, to 3i European Operational Projects (3i EOPF) (see here a previous post by BeBeez). The transaction is worth 16 million of euros. Rekeep will hold 5% of MFM Capital. Giuliano Di Bernardo is the ceo and chairman of Rekeep that in 3Q18 generated sales of 686.7 million (664.5 million yoy), an ebitda of 74.2 million (74.6 million), and net financial debt of 323.9 million.

US private equity TA Associates acquired a stake of List, an Italian developer of software for the financial industry (see here a previous post by BeBeez). Chairman and ceo Enrico Dameri founded in 1985 Pisa-based List, which has sales of 50.1 million of euros, an ebitda of 21.1 million, and net cash of 46.3 million. TA Associates appointed managing directors J. Morgan Seigler and Naveen Wadhera, and vicepresident Stefan Dandl as board members.

Italian private equity Investindustrial acquired sweets ingredients producer Italcanditi from the Goffi Family (see here a previous post by BeBeez) and US iconic bath-tubs and showers maker Jacuzzi Brands from financial firms Apollo Global Management, Ares Management Corporation, and Clearlake Capital Group (see here a previous post by BeBeez). As for Italcanditi, Maurizio Goffi and Carlo Parmoli will keep their role of ceo and coo of Italcanditi, while the Goffi family will hold 30% of the business that has an enterprise value in the region of 170 million, revenues of 105.7 million, and an ebitda of 18.1 million. The company’s ceo Goffi said that the company aims to play an active role in the sector consolidation. Andrea Bonomi, the chairman of Investindustrial advisor board, said that the fund aims to implement an international buy-and-build strategy for Italcanditi. As for Jacuzzi, Investindustrial asked Nottingham Spirk Design Associates, a product design company, to take a minority stake in Jacuzzi. Charles “Chuck” Huebner will be Jacuzzi ceo. The company has sales in the region of 500 million of US Dollars.

SICIT 2000, a producer of chemical products for the agronomic and agrochemical sector that belongs to Intesa Holding, aims to merge with SprintItaly, the Spac that Fineurop, Gerardo Braggiotti, Matteo Carlotti, and Francesco Pintucci sponsored (see here a previous post by BeBeez). SprintItaly raised 150 million of euros from investors, while SICIT has an equity value of 160 million or 7x ebitda (22.1 millions). SprintItaly will pay 100 millions for 54% of the combined entity, but it may take an up to 60% stake. The Spac will give back the shareholders the remaining 50 million. Intesa Holding will receive 70 million and, while 30 million will strenghten the company’s growth. SICIT generates abroad 70% of its sales of 53.9 million .

Sonnedix, a photovoltaic energy company acquired 28 plants from Graziella Green Power (see here a previous post by BeBeez). Alex Thiemann, the ceo of Sonnedix, said that the company is interested in further buys.

French private equity Siparex acquired 31% of Plurima, a provider of services for healthcare logistic and administrative outsourcing from the Marconi family (see here a previous post by BeBeez). Siparex may invest up to 9 million of euros for an up to 41% stake. Siparex partners Andrea Gianola and Tomaso Barbini joined the board of Plurima that in 2017 acquired BluKappa and Bridge Technologies and posted revenues of 28.3 million.

Proiezioni Future sells to Orion the office development portion of the SeiMilano Project in Milan. Orion will invest 100 mln euro