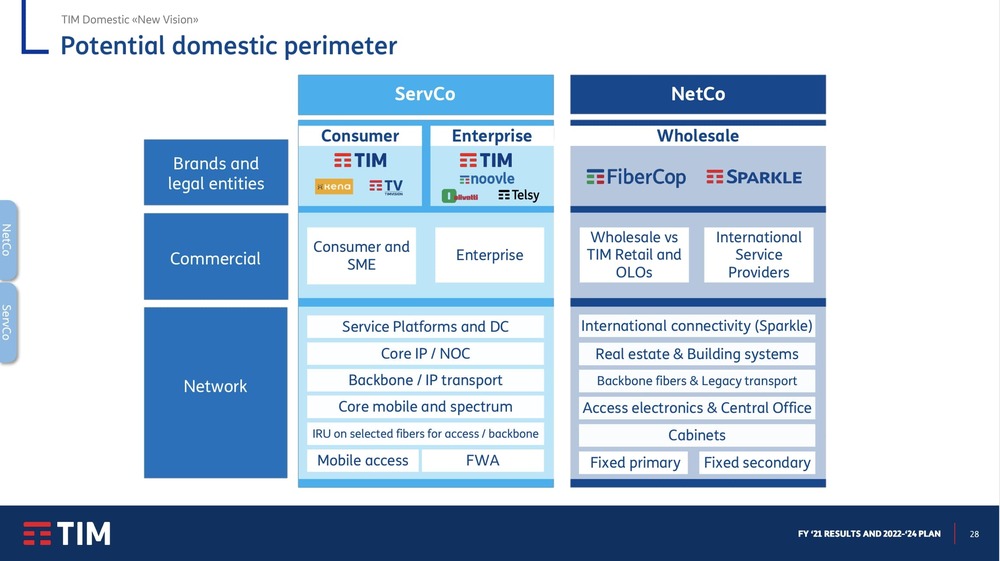 An English version will be available soon

TIM signed a confidentiality agreement with CDP Equity on Saturday 2 April to initiate preliminary discussions regarding the possible integration of the TIM tlc network with the Open Fiber network, of which Cdp Equity holds 60% of the share capital, with the remaining 40% in the hands of Macquarie Infrastructure since last December 2021 (see here a previous article by BeBeez). This was communicated by the tlc group itself, at the request of Consob, specifying that the agreement is functional to start negotiations with the aim of reaching the stipulation by April 30 of a memorandum of understanding aimed at defining the objectives , the perimeter, the structure and the main evaluation criteria and parameters relating to the integration project (see the press release here).

Recall that Open Fiber manages the largest Italian FTTH network, serving more than 12 million families in over 180 urban centers and more than 2,300 rural areas across the country. It also guides the spread of ultra-fast broadband throughout Italy. Based in Milan, last December Open Fiber launched the new industrial plan 2022-2031, which provides for around 11 billion euros of investments for the coverage with the latest generation network of around 24 million real estate units (IU) of over 13 million IU current and to support the growth of the customer base, in line with the plan target which provides for the achievement of the take-up target of 50%. These investments will be covered by the extension of the financing to 7.175 billion euros, by equity and cash generation. At the end of the plan, a margin of over 75% is expected, with revenues of over 2 billion euros. Break even (ebitda net of investments) is expected in 2026.

All this without taking into account the effects of an integration with the TIM network. We recall, in fact, that for some time the Open Fiber story has been intertwined with that of FiberCop, the new company into which TIM’s secondary network (the so-called last mile, from the cabin on the street to the homes) and the fiber network developed by FlashFiber, TIM’s joint-venture (80%) with Fastweb (20%). The KKR Infrastructure fund acquired 37.5% of FiberCop in April 2021, investing 1.8 billion euros, based on an enterprise value of approximately € 7.7 billion, while Fastweb obtained a 4.5% stake in exchange for the contribution of its stake in FlashFiber (see here a previous article by BeBeez). The entry of KKR and Fastweb in the capital of FiberCop has always been considered the first step towards the realization of a broader project for the establishment of a single company in the Italian national network, necessary for the development of digital in Italy, which should have involved OpenFiber .

Moreover, the boards of directors of TIM and Cassa Depositi e Prestiti already in August 2020 had approved a letter of intent between TIM and Cdp Equity aimed at integrating FiberCop with OpenFiber to give life to AccessCo, a company also open to other investors and destined to manage the single national network. AccessCo was to be established through the merger between FiberCop and Open Fiber (see here a previous article by BeBeez). But then that letter of intent remained in the drawer.

That the project was accelerating, however, had been clear for a few days. In particular, last week, on the occasion of his speech at the Bloomberg Italy Forum, Francesco Giavazzi, an economic advisor to the Italian Prime Minister, said: “The single network is one of the objectives of the government and it will happen”. The confirmation of a squeeze on the project also came from Cassa Depositi e Prestiti. In fact, its ceo Dario Scannapieco said: “Duplication of investments on the network makes no sense from an industrial point of view. We carefully monitor the evolution of a strategic sector for Italy” (see here a previous article by BeBeez).

Meanwhile, the delivery of the binding offer by KKR on TIM is expected today, as requested by the Board of Directors of the Italian tlc group in the response letter sent in recent days to the US private equity giant, in turn in response to a letter that the same fund had sent a few days earlier. That letter by KKR had requested the opening of the due diligence and confirmed the interest in the entire TIM capital, but had not clarified as requested whether the extent of the offer put on the table in November had remained the same, ie about 11 billion euro of equity value for 100% of TIM at a price of 0.505 euro per share, equal to an enterprise value of about 33 billions. The binding offer will then be discussed at the next TIM board meeting scheduled for Thursday 7 April, a meeting which is also expected to discuss the non-binding offer received in the meantime by CVC Capital Partners for 49% of the Enterprise division of the company. newco ServCo, which will be incorporated according to the plan of ceo Pietro Labriola (see here a previous article by BeBeez).