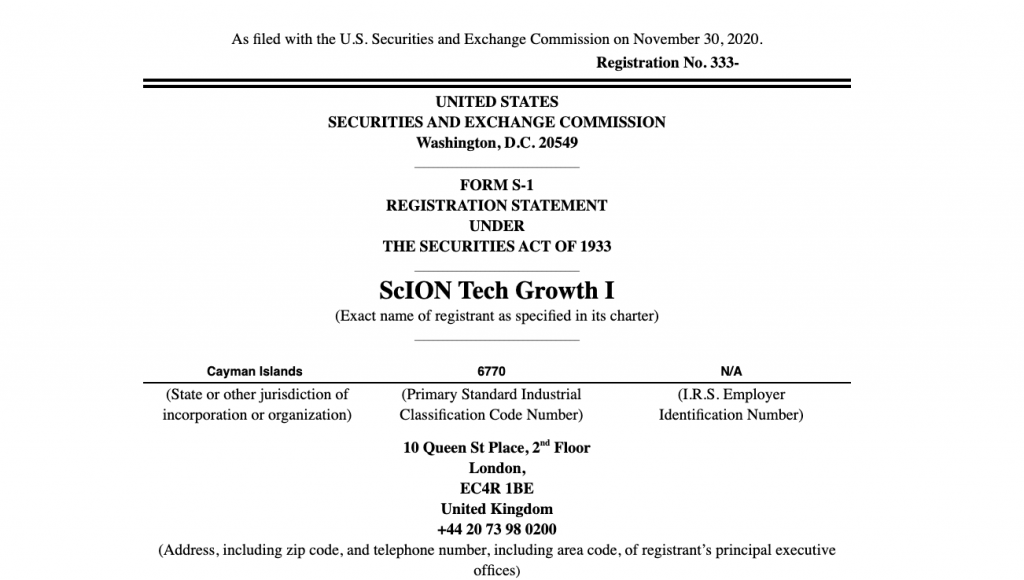 ION Investment Group, a global technology provider serving the financial sector, founded more than 20 years ago by Italian entrepreneur Andrea Pignataro, will list the Spac ScION Tech Growth I on the Nasdaq market. The Spac has a fundraising target of 500 million dollars plus other 75 millions in the event of the entire exercise of the over-allotment option. This is what emerges from the prospectus filed last Monday by the financial software group with the SEC, the financial markets supervisory Authority in the United States (see the SEC’s file here). Bookrunners are UBS and Citigroup.

The Spac is promoted by ScION 1 Sponsor LLC, a vehicle controlled by ION. ScION Tech Growth I aims to sell 50 million shares at a price of $ 10 each. Each unit will consist of a portion of common stock and a third of a warrant, exercisable for $ 11.50. On the basis of a forward purchase agreement, the sponsor has in turn committed to subscribe additional shares of Spac for a minimum of 100 million dollars and a maximum of 300 million at the time of the announcement of the business combination.

This is a structure similar to the one chosen for the Spac promoted by Investindustrial, the private equity firm founded by Andrea Bonomi, and listed a few days ago on the NYSE. That Spac, after having raised 402.5 million dollars from investors both in a private placement and with full exercise of the overallotment option, has reached a dry powder of 652.5 million dollars thanks to a forward purchase agreement signed with its sponsor (see here a previous article by BeBeez).

Coming back to ScION Tech Growth I, the proceeds from the listing will be used to invest in technology, software and fintech companies with strong market position, leading products and global development potential. The target company of Spac will have an enterprise value (EV) between three and 10 billion dollars. Spac is led by executive chairman Andrea Pignataro, founder and ceo of ION Investment Group, and by ceo and director Mathew Cestar, who previously held the role of Co-Head Investment Banking and Capital Markets in EMEA at Credit Suisse.

ION Investment Group, based in London, specializes in software, data and analytics for financial institutions. Since its foundation in 1998, it has also grown with acquisitions. In particular, since 2004 it has made 26 acquisitions for a total enterprise value of 10 billion dollars. In May 2019, for example, it bought from BC Partners and GIC, the Singapore sovereign fund, the control of Acuris, the media group owning the well-known providers of information and data on the world m&a and debt capital market Mergermarket, Debtwire, Unquote and Asia Venture Capital Journal  (see here a previous article by BeBeez). In November 2017, on the other hand, ION, together with Carlyle, had recapitalized Dealogic, a well-known data provider on the international m&a market (see here the press release at the time). Today ION is said to be studying the Cedacri dossier, the Italian company specialized in the outsourcing of IT and back office services to banks, partly owned by Italy’s private equity firm FSI and looking for an industrial partner in view of a subsequent listing(see here a previous article by BeBeez).