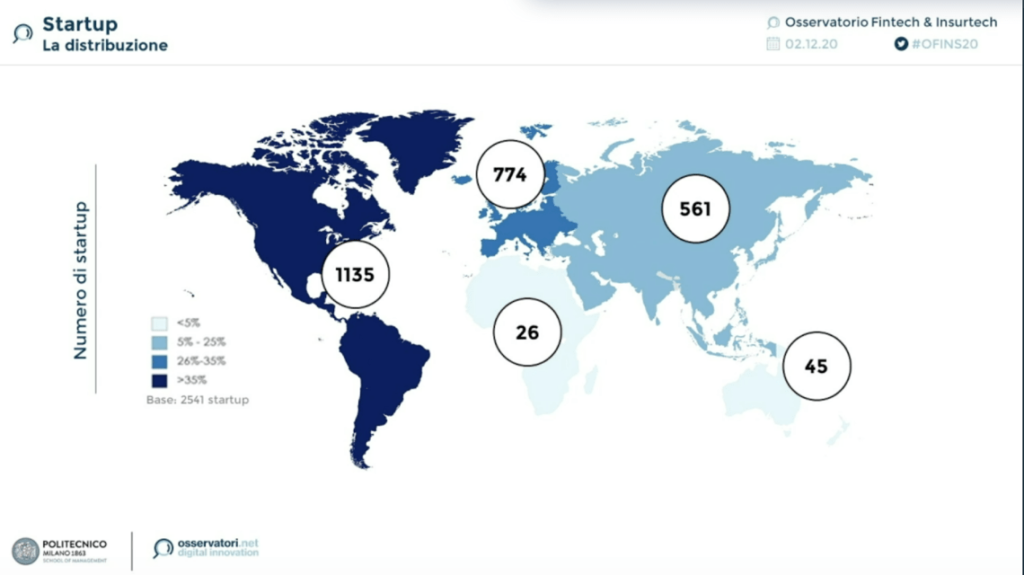 The Fintech & Insurtech Observatory of Milan Polytechnic University’s School of Management calculated that investors poured 55.3 billion US Dollars in 2541 fintech and insurtech startups globally (see here a previous post by BeBeez). Investors allocated 45% of the funds for US-based companies startups. Last BeBeez Report about fintech trends in Italy and BeBeez Venture Capital Report for the first eight monts of 2020 (both available for BeBeez News Premium and BeBeez Private Data subscribers) said that between January and mid-September 2020 fintechs based in Italy or with Italian founders raised above 135 million euros out of a total of 420 million euros raised by all startups and scaleups in the same period, while venture capital investments in the fintech sector had amounted to 261 millions in 2019 and to 200 millions in 2018.

This morning BeBeez will hold a free webinar and share the private capital preliminary results for 2020 with the associates of Assoprevidenza. If you’re interested in attending the virtual event, write to info@assoprevidenza.it. Stefania Peveraro, the Editor In Chief of BeBeez and co-founder of EdiBeez, and Giuliano Castagneto, the database manager of BeBeez will share the preliminary 2020 results of private capital in Italy that BeBeez Private Data aggregated. Assoprevidenza’s associates have an above 15% discount for the subscription to BeBeez Private Data further information available here .

On 16 December, Wednesday, BeBeez will be the media partner of FeeOnly 2020 Limited Live Edition, an event in live streaming of Consultique SCF, an independent financial consultant (See here a previous post by BeBeez). Sign up here for joining the event for free. Carlo Pelanda will close the event with a keynote speech about the geopolitic scenario. The independent consultants that will join FeeOnly 2020 will have the opportunity to subscribe to BeBeez Private Data for one month at a fee of 200 euros plus VAT. Write to info@edibeez.it if you’re interested in the offer and mention FeeOnly 2020 in the subject line. BeBeez Private Data includes information about 2300 firms, 3000 private equity and venture capital deals and more than 1000 private debt transactions. This video provides information about BeBeez Private Data which grants the access to BeBeezNews Premium and allows to read all the Reports and Insight Views of BeBeez.

Cassa Depositi e Prestiti and Chili aim to develop a platform for streaming Italian cultural events and exhibits (see here a previous post by BeBeez).  Cdp will pour 9 million euros of capital in cash and will have 51% of the venture, while Chili will contribute with 9 million in cash, technology and know-how. The Italian Ministry for Tourism and Culture (Mibact) will invest 10 million for the platform that will be operative in early 2021.

Italian Red Fish LongTerm Capital raised 6.17 million euros through the equity crowdfunding portal Opstart, the founder and ceo Paolo Pescetto announced (see here a previous post by BeBeez). The company  had set a maximum fundraising target of 8 millions and the funds raised represented the second highest result for an equity crowdfunding campaign in Italy  after the one by an other investment veichle, Fin-Novia, which had raised 7.2 millions last Summer . RFLTC will invest the raised proceeds in the acquisitions of minorities and majorities of Italian SMEs with a below 10 million ebitda.

Cdp Venture Capital, StartupBootcamp and Sport e Salute launched WeSportUp, an accelerator for startups and innovative SMEs for the health and sport sectors (see here a previous post by BeBeez). Fabrizio Palermo is the ceo of Cdp, Vito Cozzoli is the chairman and ceo of Sport e Salute, Alceo Rapagna is the ceo of Startupbootcamp in Italy, Francesca Bria and Enrico Resmini are the chairman and ceo of Cdp Venture Capital. WeSportUp has resources of 1.2 million euros that Cdp Venture Capital poured through Fondo Acceleratori. The programme will involve 30 companies in 3 years.

Italian crowdfunding portal Opstart started the placement of a minibond on its subsidiary Crowdbond, part of Crowdbase (see here a previous post by BeBeez). Crowdbond will host the debt crowdfunding campaigns of Fenice and of ARC Real Estate (1.5 million euros, 5 years maturity, 6% yield and a 90% warranty from the  Fondo di Garanzia pmi). ARC will invest the raised proceeds in the acquisition of portfolios of NPLs. Giovanpaolo (ceo) and Alessandro Arioldi (cto) founded Opstart in 2015. In November 2019, the company raised a financing round that Aleph Finance Group, the owner of Pairstech Capital Management, subscribed.

Sealence, an Italian startup that developed DeepSpeed, the electric jet for the naval sector, launched an equity crowdfunding campaign on CrowdFundMe (see here a previous post by BeBeez). The company already raised more than the least target of 0.3 million euros and aims for the upper target of 2 million. DeepSpeed has a pre-money value of 33.5 million and aims to launch an IPO in the next three years. Sealance launched this campaign as part of a round of 7 million for which it is already holding talks with Italian and foreign venture capital funds. In October 2019, Sealence raised 0.45 million through CrowdFundMe and previously placed a convertible minibond of 0.5 milllion.

Grownnectia, a consultancy firm for startups, achieved a 270% overfunding for its equity crowdfunding campaign on BacktoWork and raised 270k euros from 62 investors (see here a previous post by BeBeez). The company set a target of 100-500k euros with an investment ticket of 250 euros on the ground of a pre-money value of 6.2 millions. Grownnectia will invest such proceeds in its organic development and international expansion. The firm attracted the resources of Marco Bacini, Luigi Foscale, Paolo Cabassi, Francesco Osti, Giacomo Bruno, Alessandro Cianciaruso, Alessandro Vergano, Francesco D’Alessandro, and other investors. Massimo Ciaglia is the ceo of Grownnectia.

Milan-listed real estate developer Borgosesia both back the stakes that investors acquired for Elle Building through the equity crowdfunding campaign on Concrete (See here a previous post by BeBeez). The buyer and the vendors exercised the put & call options. The campaign for Elle Building allowed to raise 1.5 million euros in July 2019.

On 3 December, Thrursday, Banca d’Italia launched Milano Hub, its fintech pole (see here a previous post by BeBeez). Milano hub aims to make liaise players of the financial and technology sectors with academics and with Banca d’Italia, said the Italian governor Ignazio Visco, who announced earlier in May the launch of the initiative hub (see here the Insight View of BeBeez of 1 June). The readers of BeBeez News Premium have access to the BeBeez Reports and Insight Views. The monthly subscription fee is 20 euros per month plus VAT (or 240 euros per year plus VAT). The subscription to BeBeez Private Data Combo grants access to BeBeez Private Data, a database that includes the financials of more than 1700 Italian companies that belong to private equity, venture capital and private debt investors, and allows to access BeBeez News Premium for a monthly fee of 110 euros plus VAT (or 1320 euros plus VAT per year). Students can subscribe to BeBeez News Premium for 15 euros (VAT included) for the first month and renew the subscription monthly. Please click here or write to info@edibeez.it for further information about the subscription procedure.

Hype, a financial services firm in which Illimity and Fabrick invested, launched Next, a digital current account (See here a previous post by BeBeez). Earlier in March, Hype launched Hype Bitcoin together with Italian fintech Conio.

Banca Sella signed a partnership with German fintech Raisin for allowing its clients with the access to deposit accounts on Italian and European accounts (See here a previous post by BeBeez). Frank Freund, Michael Stephan and Tamaz Georgadze founded Raisin in 2012 and raised 206 million US Dollars between 2014 and 2019. The company attracted the resources of PayPal Ventures, Index Ventures, Ribbit Capital, Thrive Capital, Goldman Sachs, Orange Ventures, and Latitude.+