LSEG agrees to sell Borsa Italiana to Euronext-Cdp in a 4.325 mld euro deal 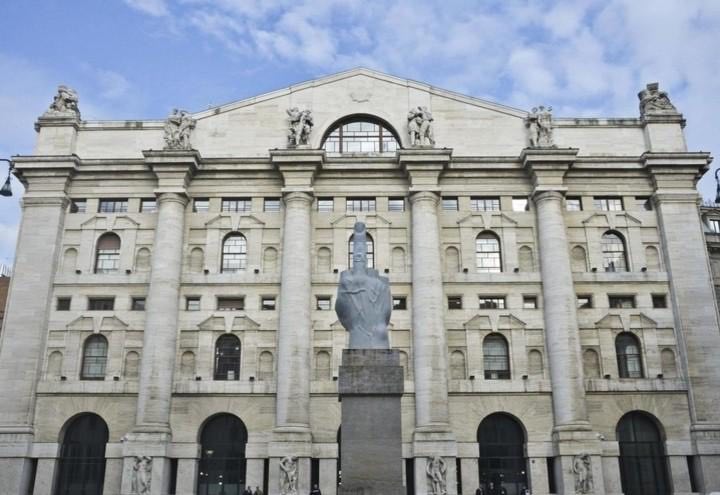 London Stock Exchange Group (LSEG) announced the sale for 4.325 billion euros of Borsa Italiana to the Euronext-Cdp consortium, allied with Intesa Sanpaolo (see here the note by Euronext, here Euronext’s analysts presentation, here the LSEG press release and here the one by Cdp).

The sale has a multiple of 16.7x the adjusted ebitda of Borsa Italiana and its proceeds will be used by LSEG to reduce the debt resulting from the possible acquisition of Refinitiv, bringing LSEG to a target net debt of 1-2x the ebitda.

News of the sale of Borsa Italiana was expected from last September, when exclusive talks between LSEG and Euronext-Cdp were announced (see here a previous article by BeBeez). On 11 September, two other binding offers had arrived in addition to that of Euronext-Cdp: one from Deutsche Boerse and the other one from Six, which controls the Zurich and Madrid stock exchanges (see here a previous article by BeBeez). 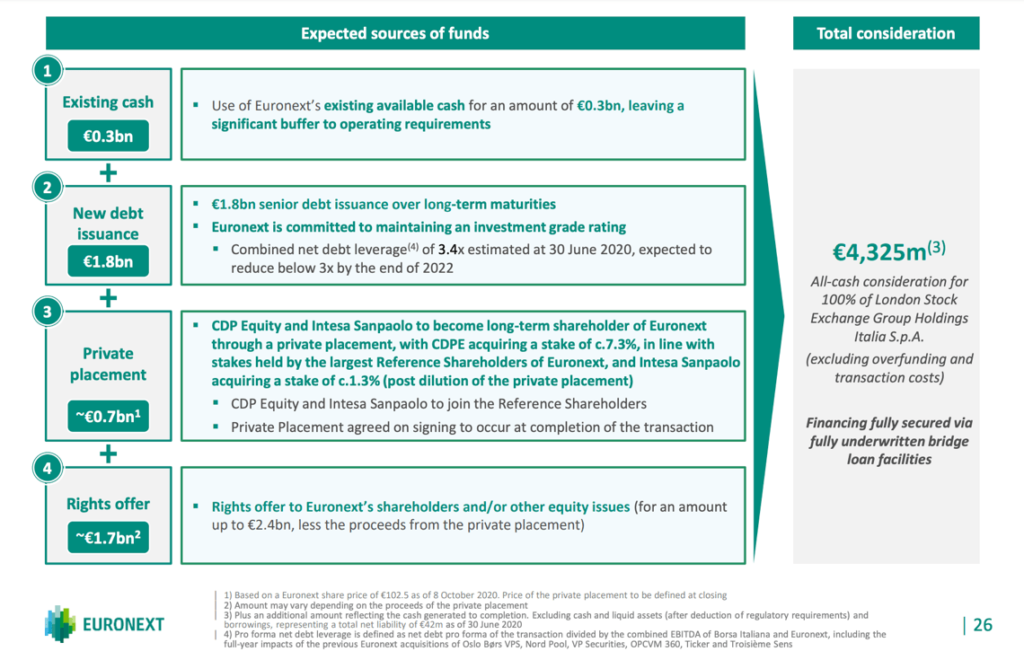 the purchase of Refinitiv by LSEG (see here a previous article by BeBeez). The deal on Borsa Italiana, which is expected to close by the first half of 2021, will be financed by CDP and Euronext through a mix of existing cash (300 million euros), a 1.8 billion euros loan facility provided by a pool of banks (Bank of America Merrill Lynch, Crédit Agricole Corporate and Investment Bank, HSBC France and JPMorgan Securities plc) and new equity capital in the form of a capital increase in Euronext subscribed in a private placement reserved to Cdp Equity and Intesa Sanpaolo (700 million euros, respectively for a 7.3% and a 1.3% stake) and a rights offer to Euronext’s shareholders (1.7 billion euros).

The main businesses and some central functions of the combined group will be based in Milan and Rome and the leadership of the group finance function will be based in Milan. At the end of the transaction, Cdp Equity, led by Pierpaolo Di Stefano, will own 7.3% of the share capital of Euronext, like Caisse des Dépôts et Consignations, counterpart of Cdp. The operation is consistent with Cdp’s mission to support the country’s strategic infrastructures with a long-term perspective. In fact, Borsa Italiana is an essential financial infrastructure, representing the main hub for the collection of equity and bond capital by Italian companies and for the promotion of listed shares.

The transaction provides that:

David Schwimmer, ceo of LSEG, explained: “We continue to make good progress with the Refinitiv operation and we are delighted to have reached this important milestone. We believe that the sale of the Borsa Italiana group will contribute significantly to solving the competition problems of the European Union. The Borsa Italiana group has played an important role in the history of LSEG. We are confident that it will continue to develop successfully and contribute to the Italian economy and European capital markets under Euronext ownership.”

Raffaele Jerusalmi, ceo of Borsa Italiana, said: “We have had a long and fruitful relationship with LSEG, which has invested and developed our business over the past 12 years. We look forward to starting the next phase of our history. working in partnership with Euronext, Cdp Equity and Intesa Sanpaolo to further develop our business and contribute to the development of the European capital markets “.

Stéphane Boujnah, ceo and chairman of Euronext explained: “The acquisition of the Borsa Italiana Group marks a significant result in Euronext’s strategic plan ‘Let’s grow together in 2022’ and a turning point in the history of our Group. Thanks to this operation, Euronext will significantly diversify its revenue mix and geographic footprint, welcoming the market infrastructure of Italy, a G7 country and third largest European economy. The combination of Euronext and the Borsa Italiana Group, with the strategic support of investors long-term as CDP, it allows to realize the ambition of building the main pan-European market infrastructure, connecting local economies to global capital markets. This operation will strengthen the position of the Borsa Italiana Group in the capital markets of continental Europe. The merger proposal will create the backbone of the European Capital Markets Union. The Borsa Italiana Group will maintain its identity and integrity within the Euronext federal model, while benefiting from enhanced governance, cutting-edge offer and technology, to better serve the Italian capital markets “.

The ceo of Cassa Depositi e Prestiti, Fabrizio Palermo, said: “We are particularly proud to be the protagonists of this deal: Cdp contributes to bringing Piazza Affari into a pan-European group with a stable presence of Italian investors. Through the acquisition of 7.3% of Euronext, Cdp will extend its commitment as a long-term investor to support companies that will benefit from an Italian-led capital market in a broader European perspective. The Italian Stock Exchange and its subsidiaries will become central in the Euronext system, in which Italy will represent the most relevant market, assuming a role of reference at the continental level. This transaction follows the recent announcement of the agreement for the creation of the leading company in the market of digital payments and trading platforms with the merger between Sia and Nexi. The support of the shareholders and the management of two important listed companies such as Nexi and Euronext confirm the role of CDP as a strategic and reliable partner for Italian companies and international investors ”.

The  chairman of Cassa Depositi e Prestiti, Giovanni Gorno Tempini, added: “The agreement reached today allows Italy to return a central role in a strategic infrastructure and to start, thanks to the agreement with Euronext, a strong partnership with other important European investors such as Caisse des Dépôts and Banca Intesa Sanpaolo, among others. It is therefore a market operation that will give birth to a leading group on a continental level. At a time when discussions about a Capital Markets Union are starting again, the new Euronext could be the first nucleus of a complete European capital market since it already represents an infrastructure that unites seven national securities markets. In addition, it will give an Italian centrality to the entire industry that revolves around the stock exchange, enhancing the role of companies such as MTS, Cassa di Compensazione e Garanzia, Elite, Monte Titoli within the entire Euronext group. All these new skills will be based in Italy, together with data centers: a development opportunity for the entire Italian industry of services for financial intermediation “.

Euronext operates six other stock exchanges in Belgium, France, Ireland, the Netherlands, Norway and Portugal with over 1,800 listed companies, for a total of 4,400 billion euros  in market capitalization. The integration of Borsa Italiana into this pan-European liquidity pool should increase the liquidity of the Italian market and the visibility of the issuers, and more generally strengthen the role of our country in the European capital market. In fact, Italy will represent the single most relevant market of the new Euronext, with approximately one third of revenues and employees.

The combined revenues of the new Euronext for 2019 will amount to 1.3 billion, with an ebitda of 711 million. The new group will have: over 1,800 listed companies, 4.4 trillion capitalization, approximately 11.7 billion shares traded, pre-tax cost synergies of 60 million euros per year within the third year of the acquisition.