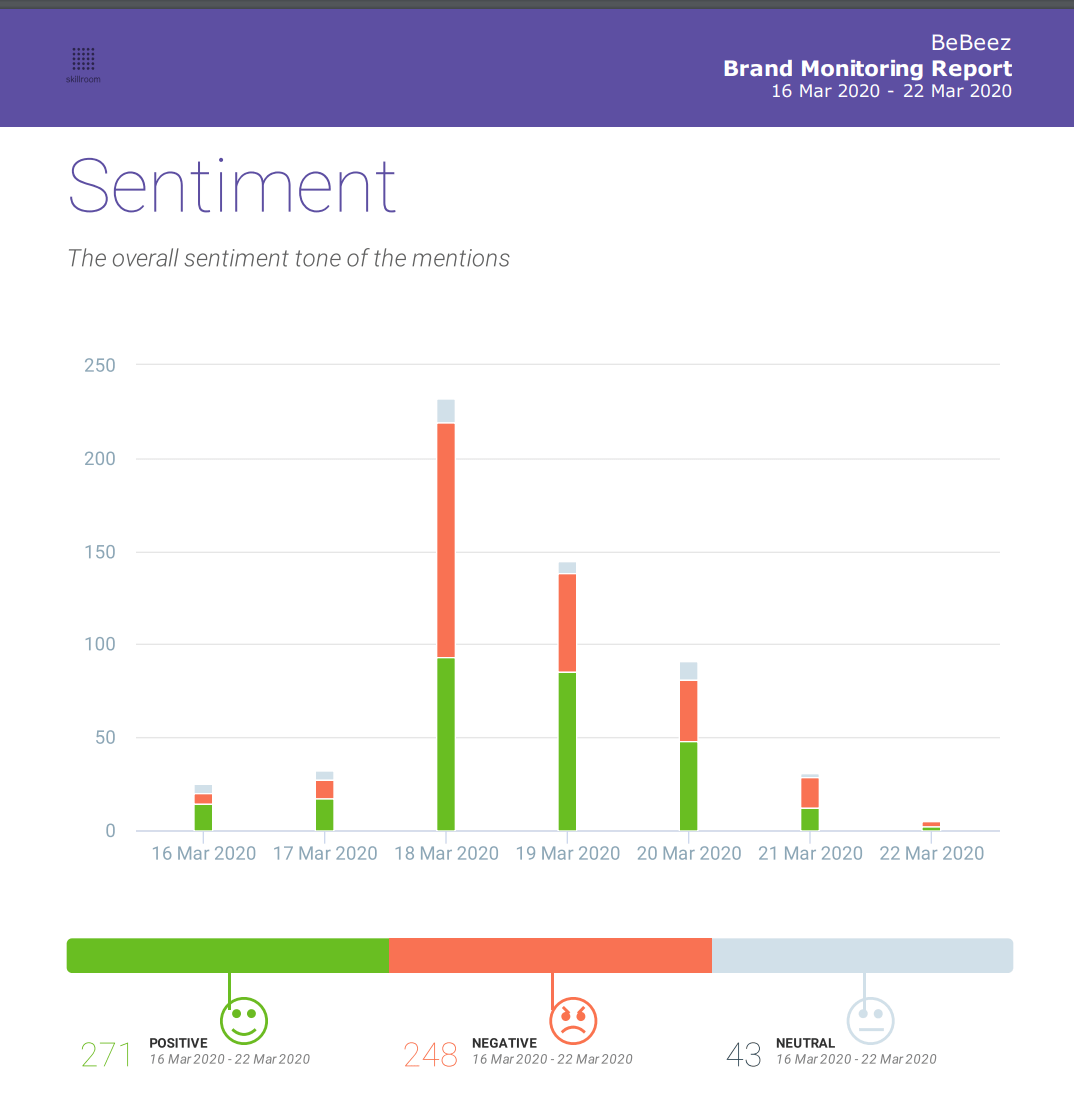 BeBeez and SkillRoom, a startup spin-off of Turin University, carried an artificial intelligence-based screening of English written stories and social networks posts about the investors’ sentiment about Italian equity and debt of listed and private companies and the real estate sector  (see here a previous post by BeBeez). Several economic research centres issued their reports about the outlook for Italy on the ground of hypotheses that may not communicate to investors a correct sentiment about the country’s perspectives. Between 16 and 22 March 2020 the investors’ negative sentiment went up of almost 25%, while the positive attitude increased by 36%. Skillroom was born in 2017 and operates in the fields of machine learning out of the big data, natural language processing (NLP), and of minority and unwritten languages. The company already received more than 0.7 million euros and developed several tools for web marketing, analytics, and sentiment analysis. For a test analysis, click here or click here for information.

PlayWood, an Italian furniture startup, launched an equity crowdfunding campaign on Mamacrowd portal (see here the campaign features on CrowdfundingBuzz and see here a previous article by BeBeez). The company aims to raise 200-500k euros for a 4.26% stake on the ground of a pre-money value of 4.5 million for an investment ticket of at least 500 euros. PlayWood already attracted 0.133 million from 15 investors and will invest such proceeds for supporting its scaleup stage. Stefano Guerrieri is the company’s ceo and founded the company with Stefano Guerrieri, Carlotta Nizzoli, and Mirco Bonilauri. In November 2017, LVenture Group, Barcamper Ventures, Angel Partner Group – APG invested 0.4 million in the company together with other business angels. In February 2019, the same investors poured 0.45 million in PlayWood which generates abroad 80% of its 0.5 million (0.4 million yoy) sales.

Italian startup AorticLab launched an equity crowdfunding campaign on Doorway (aee here a previous post by BeBeez). Italian Angels for Growth (IAG) and Club degli Investitori already signed a commitment for supporting AorticLab, a company that Franco Osta founded in 2017 and that set its headquarter at the Bioindustry Park of Colleretto Giacosa (Turin area). Doorway signed a partnership with Bper Banca and promoted the company’s third roadshow which is ongoing since 20 February, Thursday. In 2019, Bologna-based Doorway hosted the campaigns of Vintag (a marketplace for vintage items), Garanteasy (a provider of warranties solutions for retailers), and MySecretCase (an e-merchant of sex toys).

Italian challenger bank Hype (part of Banca Sella) and Italian fintech Conio launched Hype Bitcoin, an application for trading cryptocurrencies directly from a current account (see here a previous post by BeBeez). The companies launched a beta version of Hype Bitcoin that will be available to all clients by the end of March 2020.  Hype received the support of Italian accelerator SellaLab and later Fabrick, the open banking platform of which Banca Sella is the controlling shareholder, integrated it. In 2015, ceo Christian Miccoli (the former ceo of CheBanca! part of Mediobanca) and cto Vincenzo Di Nicola founded San Francisco-based Conio, whose shareholders are Poste Italiane (20% since 2016 with an investment of 3 million euros), Banca Finint, Fabrick, Boost Heroes, Italian Angels for Growth, David Capital (the investment vehicle that Andrea de Vido and further finance professionals founded) and other investors. In June 2018, Conio launched a 3 million US Dollars capital increase on the ground of an enterprise value of 40 million.

B Heroes, the ecosystem for innovative startups, and venture capital Boost Heroes launched Coronavirus Heroes (C Heroes) a call of 0.1 million euros for startups that may help to face the current COVID-19 emergency (See here a previous post by BeBeez). All those startups born since 15 March, Sunday, can join this call no later than 31 March, Tuesday. However, winners may receive the award of 0.1 million before the deadline. Luciano Bonetti (Foppapedretti), Gianluca Dettori (dPixel), Margherita Costanza (Macnil, Gruppo Zucchetti), Giampietro Vigorelli, and Fabio Cannavale (the founder and ceo of lastminute.com and one of the top Italian seed capital investors of dPixel, H-Farm, Club Italia, and Digital Magics) founded Boost Heroes, fka Shark Bites with an initial investment of  2.4 million. In the last 4 years, the company invested in more than 100 startups and its current resources amount to 10 million.

Italian insurtech Yolo (You Only Live Once) posted a 2019 turnover of 1.8 million euros (aee here a previous post by BeBeez). Yolo is an insurance broker for on-demand and pay-per-use products with a daily or a monthly subscription. Simone Ranucci Brandimarte, the chairman of Milan-listed Digitouch who previously founded Buongiorno and Glamoo, founded Yolo in 2017 together with the company’s ceo Gianluca de Cobelli, and Mansutti, an Italian insurance broker. In October 2019, Yolo launched a still-ongoing series B round of up to 20 million for institutional investors that aim to support the company’s business plan. In October 2017, Yolo raised one million from Barcamper Ventures, Miro Ventures and Mansutti, while in early 2019 it launched a 6 million round for which Barcamper poured about one million. In January 2019, Yolo raised 5 million euros through a series A round that Neva Finventures and Barcamper Venturesled. The company also attracted resources of Net Insurance and Miro Ventures. Yolo raised 7 million since the beginning of its activities.

Private equity and venture, in Europe dry powder is up to 265 bn $. Preqin says in a private capital report for BeBeez