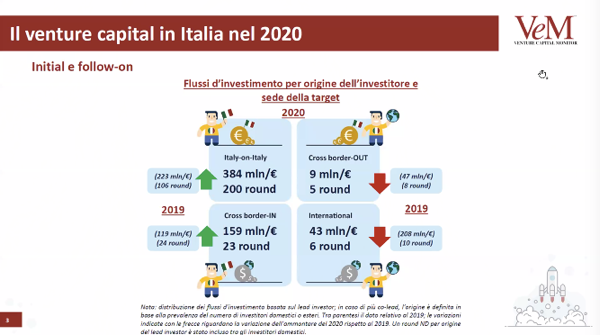 In 2020, Italian venture capital investors raised 595 million euros (597 million in 2019) and closed 234 transactions (+58%), said a report of Venture Capital Monitor (VeM), a research centre born in 2008 out of a partnership of Aifi (the Italian association of Private Equity, Venture Capital, and Private Debt funds), Liuc – Università Cattaneo, Intesa Sanpaolo Innovation Center,E. Morace & Co. Studio legale,Cdp Venture Capital, and Iban (Italian Business Angel Association) (see here a previous article by BeBeez). However, data by BeBeez Private Data say that since the beginning of 2020 the startups and scaleups based in Italy or with Italian founders attracted 780.5 millions from venture capital investors in 306 round (605 million for 244 rounds in 2019 and 510 million in 179 rounds)(see here BeBeez Venture Capital and Venture Debt Report for 2020 available for the subscribers to BeBeez News Premium and BeBeez Private Data). The latter ara data including investments by venture capital funds, corporate venture capital, business angels and crowd of the equity crowdfunding platforms and venture debt investments (about 75 millions). BeBeez data are more in line with VeM data, when VeM takes into consideration funds, corporate venture capital and business angels’ investments all together bringing the figure to about 650 million euros.

Altilia, an Italian deep-tech company that is developing Altilia Intelligent Automation, an Artificial Intelligence solution for business process, will raise up to 3 million euros from Cdp Venture Capital (see here a previous post by BeBeez). The company will receive 2 million at the closing and 1 million at the end of 2021 and invest such proceeds in its organic development. Massimo Ruffolo founded Altilia in 2010 as a spin-off Italian research institute CNR. Altilia attracted an equity investment of 2.6 million from Principia in 2012. The company has sales of 1.42 million with an ebitda of minus 0.196 million.

Italian hypercars producer Mazzanti Automobili launched a Securities Token Offering (STO) on Luxembourg platform Stokr, a digital marketplace for investing in blockchain-based startups (see here a previous post by BeBeez). Luca Mazzanti founded the car maker in 2002 and previously launched three equity crowdfunding campaigns on CrowdFundMe (0.611 million euros raised), Seedrs (above 1 million) and Fundedbyme (still ongoing and with a 0.3 million target). The STO of Mazzanti has a tenure of 60 days for a target of 0.8 – 0.999 million. Investors can pour Bitcoins (BTC), USD Tethers (USDT, an US Dollar-based stable coin) or Liquid Bitcoins (L-BTC). Mazzanti will issue tokens (MZZ) with a face value of 1 euro, that give the right to receive pro quota 50% of the sale value of Evantra Millecavalli Racing, a hypercar.

Sellrapido, a software provider for e-commerce, raised an undisclosed amount of resources from Azimut Digitech Fund and Gellify, a B2B innovation platform (see here a previous post by BeBeez). Milan-listed Azimut and Gellify launched the fund in 2020 for investing in publishers of B2B software and raised 65 million euros, above the 50 million target. Salvatore Petrozza (ceo) founded Sellrapido in 2017 while in 2018 it attracted the investments of Davide Brioschi and Alessandro Palmieri. Sellrapido expects to generate sales of 0.85 million euros.

G2 Startups, an Italian accelerator of startups, is the new coordinator of the Italian activities of Open Insurance Initiative (Opin), an international think tank that supports the growth of the open innovation in the insurance sector (see here a previous post by BeBeez). G2 Startups is also a strategic partner of Vittoria Hub, the insurtech incubator of Vittoria Assicurazioni. Opin and G2 aim to boost the development of open insurance and its ecosystem. Opin and G2 Startups will launch Italy Working Group (IWG) and Playground. The IWG is an Italian open insurance community, open to Italian or Italy-based startups and insurance companies, intermediaries, service providers, as well as business and technology experts. The Playground is a technological sandbox for testing the development and effectiveness of a set of open APIs applicable within the proposals of the IWG.The Italian startup D4Next and the international operator Tesobe, which launched the Open Bank Project platform, will also be technological partners of such initiatives.

Milan-listed Banca Ifis launched a digital lending platform for SMEs together with Veneto Sviluppo and the Veneto Region (See here a previous post by BeBeez). The digital lending is an agile service that will make the credit check quicker for the applications for mortgages with the warranty of Fondo di Garanzia Mediocredito Centrale (MCC). The applicants may receive an answer in 3 days. Banca Ifis has net profits of 68.8 million euros, a CET1 of 11.29% (+0,33% yoy), a Gross Npe ratio of 6.4% (9.8%), and a brokerage margin of 16.2% or 468 million.