Home Data&Analysis From the National Innovation Fund one billion in three years for venture capital and startups. Another billion will come from the benefits of the 2019 Budget Law. Here is Mr. Di Maio’s plan
Data & AnalysisMarch 05, 2019Posted By: Valentina Magri
Print Email

From the National Innovation Fund one billion in three years for venture capital and startups. Another billion will come from the benefits of the 2019 Budget Law. Here is Mr. Di Maio’s plan 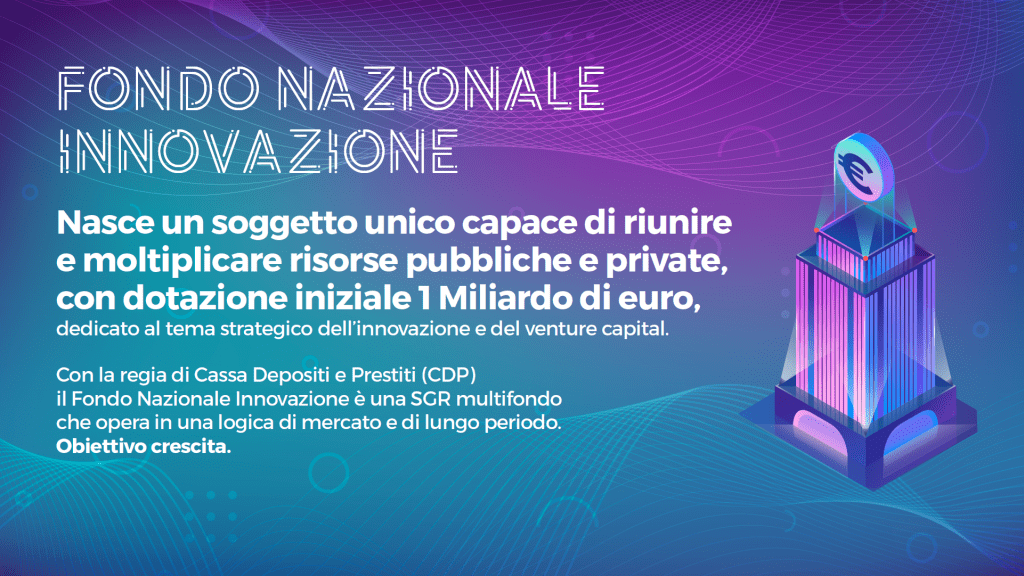 “We are starting with one billion euros, but thanks to tax reliefs we are aiming at two billions“. It is the firepower to support innovation put forward by the Italian Govenrment as a combined result of the new National Innovation Fund (Fondo Nazionale Innovazione or FNI) and of measures to support venture capital investments envisaged by the 2019 Budget Law (see here a previous post by BeBeez). This was stated yesterday in Turin by the Italian Minister of Economic Development and Labor Luigi Di Maio (see here the note from the Ministry of Economic Development and here the presentation). 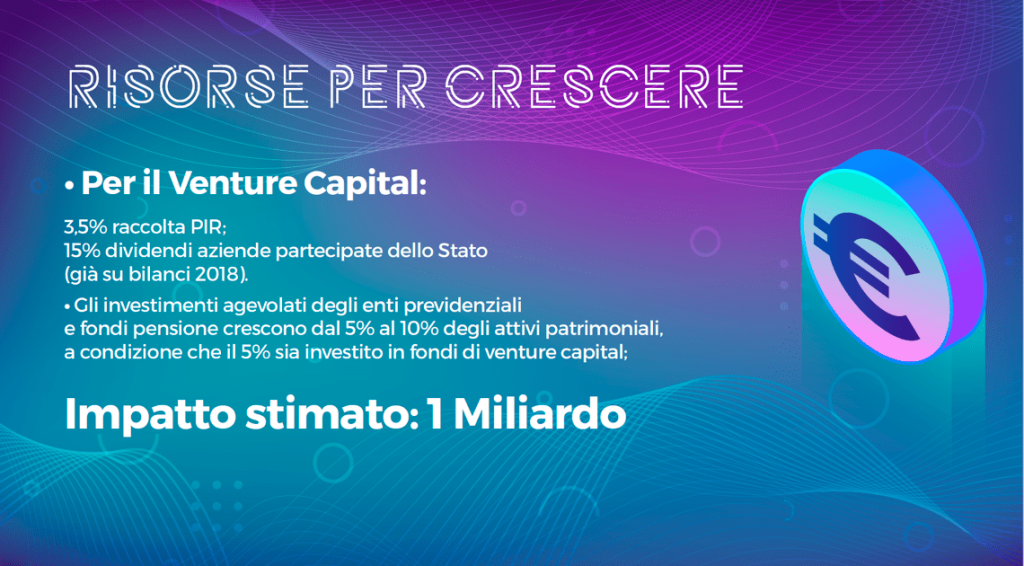 invest in other venture capital funds and in startups and innovative SMEs. The scope will be the entire national territory, with an investment approach that goes from seed capital to capital for development, with particular attention to technology transfer, and in strategic sectors for the country’s growth and competitiveness, ranging from artificial intelligence to blockchain, from new materials to space to health, from agritech and foodtech to mobility to fintech, from made in Italy and design to sustainable industry up to social impact.

The note by the Government stresses that “particular attention will be given to a series of cultural and structural delays in our ecosystem: expanding the market for venture capital operators (today limited to 9/10 subjects to tens or hundreds of France, Germany, the United Kingdom Kingdom), create space and opportunities for growth for a contextual generational change, identifying new so-called “first time team”, able to create new funds in line with emerging innovations, to rebalance the gender gap in a radical way, favoring a greater and more qualified women’s presence, accelerating the birth and development of the so-called Corporate Venture Capital in Italy, offering to the main Italian groups a venture capital platform of absolute standing and professionalism, offering regional territories and financial companies the opportunity to contribute to a great national challenge “.

The note from Government also states that the FNI is proposed as a privileged interface to European institutional investors, such as EIB and EIF and that the fund “intends to operate in order to attract in Italy large and qualified European and international venture capitalists and investors, including sovereign wealth funds  and large international companies. Acting as a catalyst and fostering the growth of national innovation towards a global scale”.

Mr. Di Maio did not explain how the Fund will reach that billion euros figure, but stressed that the FNI will be a unique player able to bring together and multiply public and private resources. That figure can however be reached quickly by making some accounts, given that the directive signed in a few days ago by Mr. Di Maio, as provided for by the Budget Law 2019, authorizes the sale by governative business development agency Invitalia spa of 70% of the share capital of Invitalia Ventures sgr (a management company of venture capital funds) at market price to Cdp, upon condition that Cdp provides additional resources, at least equal to the amount of public resources already managed by Invitalia sgr (see here a previous post by BeBeez).

To date Invitalia Venture sgr manages two funds: Italia Venture I, with a budget of 86.65 million euros, a venture capital fund that acts in co-investment with national and international private operators, and Italia Venture II (Fondo Imprese Sud), a private equity instrument, with a financial dry powder of 150 million euro set up under the 2018 Budget Law (paragraphs 807-900), financed with resources from the Development and Cohesion Fund, to which may be added subscriptions by of other investors (see here a previous post by BeBeez). The latter fund was created to foster the growth of t Southern Italy SMEs. Invitalia was also entrusted with the management of a re-industrialization fund, called Italy Venture III, with a budget of 200 million euro. However, the Budget Law 2019 has reassigned those 200 million euros to the Ministry of Economic Development. Already so we reach over 430 million euros, which multiplied by two, thanks to the contribution of the CDP, reaches 860 million euro. If we then imagine a minimum contribution from foreign investors, in particular from the EIF, then the target of one billion euros is not far. Moreover, during the presentation Di Maio spoke of a billion euros in three years, although in the Government’s note, this time horizon is not specified.

At the event in Turin attended both the ceo of Cdp, Fabrizio Palermo, and the mayor of Turin Chiara Appendino, who opened the proceedings. And the fact that Mr. Di Maio chose Turin to present the National Innovation Fund is seen as a seal to the innovative activities launched by the city council. According to rumors reported by Corriere della Sera, the City of Turin aims to bring home at least 300 million euros out of the billion mobilized by the FNI, to develop projects on aerospace and self-driving cars, the Manufacturing and Technology Center, as well as in the blockchain, cybersecurity and personal services sectors. Even the Polytechnic University of Turin would be very interested in seizing part of these resources.

Mr. Palermo said: “We will open a place of innovation, to bring together the actors of venture capital. Probably in Rome, but there is still no address”. In the meantime, the new hub announced a year ago in San Francisco in collaboration with co-working group Talent Garden will soon be opened.

In addition to the direct resources of the FNI, Mr. Di Maio stressed that the measures launched by the Government to support innovation with the 2019 Budget Law are worth, in turn, another billion euros (see here a previous post by BeBeez). . Mr. Di Maio has in fact recalled: 1) that 3.5% of the total assets of the Piani Individuali di Risparmio (Pir), according to the new definition included in the Budget Law for those savings plan to be entitled to access tax reliefs, must be invested in stakes of venture capital funds; 2) that the State revenues, deriving from the distribution of profits for the year or reserves in the form of dividends of the subsidiaries of the Ministry of the Economy and Finance, are used, to an extent not less than 15% of their amount, for investments in venture capital funds; and 3) that the subsidized investments of pension funds increase from 5% to 10% of the assets, provided that 5% is invested in venture capital funds.

The result of all that is, according to the Government note, that “investments totaling 5 billion euros in 5 years will be created, generating in parallel qualified work with a 5x multiplier. Today, the total number of people employed in startups and innovative SMEs is estimated at least 50 thousand people. It is not utopia to imagine that the new opportunities created can soon double or triple this number “.

Italy’s entrepreneurs, however, are critic on this point. Fabio Ravanelli, the chairman of Confindustria Piemonte, the local entrepreneurs’ association, complained yesterday that the confederation was not invited to the FNI presentation event: “It is really strange that the Minister of Economic Development chooses Turin to present a new economic instrument that should also help the relaunch of manufacturing and chooses to do so by excluding the institutional representatives of the main production associations. I read that with this measure the Ministry of Development hopes to double soon the current 50,000 jobs in startups and innovative SMEs that, coincidentally, is the same number of jobs that we would lose in the next few years only in the Northwest of the country in the case the works for the construction of the Turin – Lyon high-velocity railway (socalled TAV, editor’s note) were interrupted”. However Mr. Di Maio did not mentioned the TAV issue yesterday.