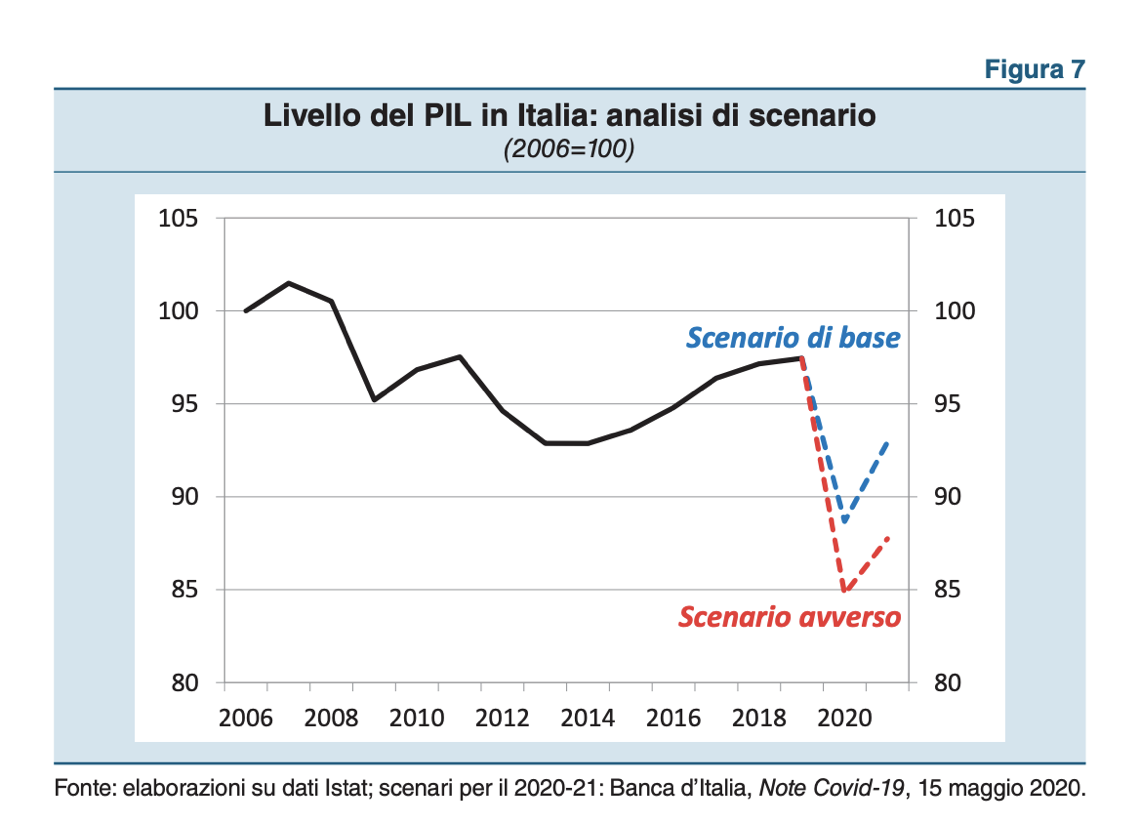 The post COVID19 emergency, will affect the banking sector in the mid-term and boost the amount of distressed credits, said Ignazio Visco, the Governor of the Banca d’Italia (see here a previous post by BeBeez). Visco said that Italian banks may need support as Italy’s GDP could shrink by 9% in 2020. However, in 2021 the GDP may recover half of its previous losses. In the medium term, despite the progress achieved in recent years, the depth of the recession cannot fail to have an impact on bank balance sheets. The increase in non-performing loans will have to be addressed in time, making use of all possible tools, including those for the restructuring of loans and their sale on the market.  As for March 31st BeBeez elaborated public data for asset quality of the 7 major Italian banks, results are in this BeBeez’s Insight View, available for BeBeez News Premium‘s subscribers (see here how to subscribe for 20 euros per month).

Banca Mps informally received the authorization from the EU for the sale of Npls to Amco (fka Sga) (see here a previous post by BeBeez). The European Commissioner for Competition, Margrethe Vestager said that the creation of a bad bank for Mps is not state aid. The Npe that MPS must sell amounts to 9.7 billion euros. Marco Morelli, the ceo of Mps, reportedly said earlier in May that the bank must close quickly such a sale branded as Progetto Idra.

Investcorp, a Bahrein-based alternative asset manager, reached the final closing for the 340 million euros fundraising for its second fund for distressed credits (see here a previous post by BeBeez).  Investcorp already invested more than 460 million in Npls. This fund will invest in real estate secured NPLs.

Banca Popolare Valconca (BPVal) sold all its UTPs with a face value of 75 million euros (see here a previous post by BeBeez). Dario Mancini, the bank’s coo, said that the firm’s Npl and Texas ratios now amount to 5% (from 15.5%) and to 37.3% (103.8%). In 2018, BPVal joined the 200 million multigacs/multioriginator securitization for the sale of a portfolio of Npls worth in the region of 1.7 billion (73.4% secured and 26.6% unsecured) that 14 co-operative banks part of Luigi Luzzatti launched.

Illimity and Vei Green launched a securitization vehicle for distressed credits of the energy sector (see here a previous post by BeBeez). The fund will invest up to 100 million euros on the primary and secondary market and already acquired credits worth above 14 million that have photovoltaic plants as underlying and are secured by the incentives of the Italian Government.

Pillarstone acquired 80 million euros of credits secured by shipping mortgages of Unicredit and Intesa Sanpaolo (see here a previous post by BeBeez). Pillarstone is also working on a sector aggregation pole for which Premuda will act as a catalyst.

Pittarosso, the Italian shoe-retailer, applied for a receivership procedure (see here a previous post by BeBeez). Pillarstone, which acquired a relevant portion of the company’s debt, and KKR may table a bid for the company. In April 2019, Lion Capital, which owns Pittarosso since 2014, started a debt restructuring and asked a standstill to bank from whom the company borrowed 200 million euros. Pittarosso’s main lenders are Intesa Sanpaolo, Unicredit, Mps, Banco Bpm, Sparkasse- Cassa di Risparmio di Bolzano, and Bnl. Quadrivio and 21 Investimenti sold Pittarosso to Lion capital on the ground of an enterprise value of 280 million or in the region of 10X ebitda (28 million in 2014). Pittarosso has sales of 366.8 million, an ebitda of 16.2 million, and a net financial debt of 97.3 million. In August 2018, Marcello Pace replaced Andrea Cipolloni in his role of ceo.

Ravenna Court accepted the receivership plan of CMC (Cooperativa Muratori e Cementisti), the troubled co-operative construction company (see here a previous post by BeBeez). Davide Mereghetti, the ceo of CMC, said that the majority of the company’s bondholders, accepted the proposed restructuring plan. CMC applied for receivership in December 2018, when the price of its Luxembourg-listed bond was below 8 Euro cents. This bond, issued in November 2017, is of 325 million euros and is due to mature on 15 February 2023 with a 6% coupon for repaying in advance its bond of 300 million with a 7.5% coupon and due to mature in 2021. The company also issued a 250 million bond due to mature on 1 August 2022 with a coupon of 6.875%. Both bonds have been suspended from trading in December 2018. CMC debt is of above 2 billion euros (575 million for the above bonds that Credit Agricole, Algebris, Ubs, Mediolanum, Vontobel, Julius Baer and Alliance Bernstein subscribed together with other investors). Muzinich has written off its position in the bonds in September 2018.

On 28 May, Thursday, the Court of Catania accepted the receivership application of Catania Calcio, the local football team (see here a previous post by BeBeez). The Court denied the bankruptcy request that the prosecutors filed. The Court said that in five days, the directors must provide a relation about the bid that Maurizio Pellegrino and Fabio Pagliara tabled for Catania Calcio through the newco Sport Investment Group Italia (SIGI). The team has a debt of more than 15 million and its controlling shareholder is Antonino Pulvirenti.

On 29 May, Friday, Milan-listed troubled engineering group Trevi Finanziaria Industriale (Trevifin) said it closed earlier than scheduled the capital increase that launched on 4 April, Saturday (see here a previous post by BeBeez). Investors subscribed 15 billion of shares for 150 million euros. The company’s shareholders subscribed the capital increase for 130 million (87.7 million in cash – FSI- CDP Equity and Polaris Capital Management evenly invested 77.5 million). Lending banks invested the unsubscribed 42.3 million for the capital increase and converted credits for further 20.8 million for a total of 284.1 million, according to a conversion rate of 4.5:1. (63 million). Trevifin shareholders are now Fsi(25.67%), Polaris Capital Management (25.67%), banks and financial firms (41.85%), and other investors (6.81%). The Trevisani Family currently has less than 1% of the asset. Giuseppe Caselli, the ceo of Trevi, said that the bank will pay on 3 June, Wednesday, its financial dues of about 3.7 million for a bond suspended in July 2018 and due to mature in 2024.

Muzinich will support Clessidra and Italmobiliare for the acquisition of Casa Vitivinicola Botter (see here a previous post by BeBeez). The funds also raised funds from a Banco Bpm, Bnl, and UBI Banca. Muzinich could pour resources through its direct lending fund and its private debt unit. Casa Vinicola Botter belongs to the third generation of the founding family Botter (Annalisa, Alessandro and Luca Botter) and to IdeA Taste of Italy (22.5%). The company has an enterprise value in the region of 330 million euros and has sales of 217 million.

Italian renewable energy company Archimede Investments issued a Milan-listed green bond of 10 million euros (see here a previous post by BeBeez). The issuance is due to mature on 31 December 2032 and pays a coupon of 4.8% on top of the 6 months euribor rate. Archimede Investments, based in Sicily, equally belongs to Gaetano Tuzzolino and Gianluca Tumminelli. Foresight Group sca Sicav-SIF will subscribe the bond. Archimede will invest the proceeds of such issuance in its internal reorganization.

Gruppo CMC, an Italian producer of machinery for the packaging and mailing industry, closed a 2.5 million euros capital increase and placed two bonds for a total of 7 million (see here a previous post by BeBeez). A club deal of private investors subscribed the capital increase, while Riello Investment Partners acquired the bonds. CMC has sales of 61 million with an adjusted ebitda margin of 16%. Sign up here for BeBeez Newsletter about Private Debt and receive all the last 24 hours updates for the sector. BeBeez welcomes you after the lockdown period with an unmissable offer: subscription to BeBeez News Premium and BeBeez Private Data for only 550 euros plus VAT from 1 June to 31 December 2020 Click here for more info.

Azimut Corporate Cash invested 26 million euros in the notes that Zenith Service issued for a securitization of commercial credits of Italian SMEs (see here a previous post by BeBeez). The SMEs sold these notes on the platform CrescItalia Lab Platform of Crescitalia Holding. Azimut Corporate Cash was born in March 2019 and invests in debt instruments that SMEs issue with a tenure of up to 12 months. The fund’s tenure is of 16 months and set a fundraising target of 50 million. Confidi Systema!, Rete Fidi Liguria and Confidi Sardegna provide the full warranty for the bonds that Azimut Corporate Cash subscribes.

Italian chemical company Esseco raised a 7-years financing of 40 million euros from Cdp and Banco Bpm (see here a previous post by BeBeez). Sace secured the 20 million amount that CDP provided. Francesco Nulli is the ceo of Esseco, which has sales of 385 million and an ebitda of 74 million. The company will invest these proceeds in its foreign expansion and the financing of the acquisition of German competitor Addcon.

BeBeez welcomes you after the lockdown period with an unmissable offer:
subscription to BeBeez News Premium and BeBeez Private Data
for only 550 euros plus VAT from 1 June to 31 December 2020
Click here for more info.