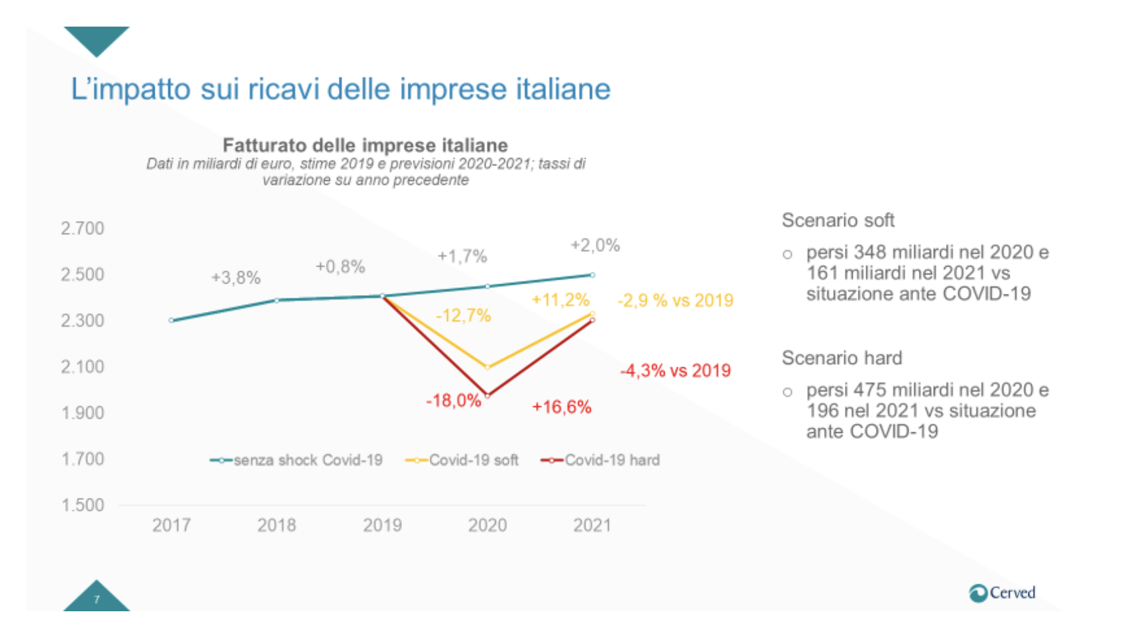 Italian companies could shrink their 2020 and 2021 turnover by  510 and 670 billion euros for the coronavirus emergency, said Cerved Industry Forecast a report of Cerved (see here a previous post by BeBeez). A previous report said that losses would have been of 270 and 650 billion. Cerved outlined a soft scenario without further lockdowns with a rapid recovery  and a hard one with further quarantines. The soft scenario would have a strong impact on automotive (-7.6%), logistic (-6.4%), and non financial services (-6%). Sales of the chemical and pharmaceutical sector may increase by 6.1%. With the hard scenario sales drop on average by 4.3%, while the revenues of the chemical and pharmaceutical sector increase by 7%.

Cerved separately said that it received a financing facility of 713 million from Banca Imi, Bnl, Bnp-Paribas, Banco Bpm, Crèdit Agricole Corporate and Investment Bank, Crèdit Agricole Italia, Intesa Sanpaolo, La Cassa di Ravenna, Mediobanca, Ubi Banca, and Unicredit (see here a previous post by BeBeez). The facility consists of a multitranche credit line of 563 million and a revolving credit line of 150 millions. Both have a 5 years tenure. The only covenant of the contract asks the company to keep a leverage ratio of below 4.5x. Cerved will invest such proceeds in refinancing a previous 660 million banking debt, and a debt of 18 million with La Cassa di Ravenna. In 1Q19, Cerved posted sales of 121.8 million (+3.6%), an adjusted ebitda of 52.3 million (-1.1%); net adjusted profits of 28.7 million (+8.7%), and net financial debt of 568.5 million or 2.4xadjusted ebitda. The company said it will not pay dividends and suspendend the 2018 – 2020 financial outlook.

As March 30th the gross value of distressed credits in the portfolio of Milan-listed Banca Ifis amounts to 17.8 billion euros (net 1.27 billion) (see here a previous post by BeBeez). Given the current lockdown, the bank acquired bad loans for just a gross value of 50 million euros. Banca Ifis is reportedly competing with MBCredit Solutions (part of Mediobanca) for acquiring Loira, a 250 million portfolio of consumer credit Npls from Unicredit. Sources previously said to BeBeez, these are the only two binding offers that made the final stage of the auction. The bank’s business plan 2020-2022 set target of 602 million for revenues coming from the activities of management of Npls and factoring. The firm will acquire 8.5 billion of distressed credits in the period.

Beniamino Caravita di Toritto, Gerardo Longobardi and Stefano Ambrosini, the extraordinary administrators of troubled Italian shipping player Tirrenia (the bad company that belongs to the Italian Government after the sale of its healthy assets to Moby in 2012) are seizing 115 million euros worth vessels from Moby-Cin (see here a previous post by BeBeez). Rome Court authorized the administrators of Tirrenia to withdraw 115 million from Moby for paying back the company’s creditors. Moby’s residual debt for the acquisition of 60% of Tirrenia amounts to 180 million on the ground of an enterprise value of 376.9 million. Moby paid 135 million in July 2012 and 62 million in February 2016 when it refinanced its debt. Moby agreed to pay the remaining 180 million in three instalments: 55 million in April 2016, 60 million in April 2019, and 65 million in April 2021. The Onorato Family, the owner of Moby, is also reportedly holding talks for restructuring its 560 million debt.

The Reggio Emilia Court accepted the request of Italian charcuterie producer Ferrarini for extending by further 60 days the deadline for tabling a new receivership plan (see here a previous post by BeBeez). Pini, an Italian producer of bresaola, confirmed its commitment for acquiring the majority of Ferrarini and to supply the necessary items for the production. The Court previously appointed Bruno Bartoli as extraordinary commissioner of the company and set a meeting with the company’s creditors for 8 July 2020. In view of this meeting, Intesa Sanpaolo grouped Grandi Salumifici Italiani (Gsi)-Bonterre, Casillo Partecipazioni and Opas, the consortium of pig farmers is working for tabling an offer for Ferrarini and its subsidiary Vismara. Unicredit, one of the lenders of Ferrarini, also approved this bid. Ferrarini’s main lenders are Intesa, Unicredit, Amco, and Mediobanca with an exposure of 200 million.

Italian newspaper La Gazzetta del Mezzogiorno is going in liquidation after the decision of publisher Mario Ciancio Sanfilippo, the owner of Edisud (see here a previous post by BeBeez). Ciancio Sanfilippo invested more than 30 million euros for relaunching the paper and said that he will pay his dues with the banking system. Earlier in February, Edisud dropped talks with potential buyers Valter Mainetti and Gianpaolo Angelucci.

Arrow Credit Opportunities (Italy) Feeder started a fundraising activity for investing the proceeds in Luxembourg-based master fund Arrow Credit Opportunities, an investor in European NPLs (see here a previous post by BeBeez). The feeder fund set a fundraising target of 150 million euros for paying investors a net IRR higher than median market figures. The feeder and the master fund will have a three years investment period at the end of which a distribution tenure of 5 years will start. Bnp Paribas Securities Services is acting as depository bank. In December 2019, Arrow Global announced a first closing of 838 million for Arrow Credit Opportunities ahead of a 2 billion target. Arrow Global is listed on London Stock Exchange and is the owner of Italy’s Sagitta sgr, an alternative asset manager that Europa Investimenti acquired in 2017. Arrow Global acquired Europa Investimenti and credit servicer Parr Credit in 2018.

Federalberghi Abruzzo, the association of hotel structures of the Southern Italian Region of Abruzzo, launched the Pluribond Re-starTurismo Abruzzo programme, for supporting the cash neeed of tourism companies in the region (See here a previous post by BeBeez). Pluribond Re-Start will keep as underlying assets the issuances of bonds of the Horeca sector SMEs based in Abruzzo. Fundera, the equity crowdfunding platform of Frigiolini & Partners Merchant (F&P), will place the bonds that will receive the Government warranty for facing the coronavirus emergency.

Ecopol, an Italian producer of eco-friendly films, issued a 4.5 million minibond euros (see here a previous post by BeBeez). Tenax Capital Private Debt Italia subscribed the bond that received the InnovFin warranty from the European Investment Fund. Ecopol will invest the proceeds in its organic development. The company has sales of 6.3 million and aims to reach a 10 million turnover at the end of 2020. In July 2019, Tenax Capital’s founder Massimo Figna sold the majority of the business to Fosun International. The private debt funds of Tenax Capital are active in Italy since 2015 and provided financing facilities to SMEs for about 150 million.

Pasta Zara raised a 25 million euros financing facility from Amco (fka Sga) (see here a previous post by BeBeez). Such injection of resources from Amco is the first step for relaunching Pasta Zara and for the implementation of its receivership plan. The company sold one of its plants to Barilla for 118 million. Pasta Zara has a gross financial debt of 241 million (178 million with banks and 73 million of credit lines from Banca Popolare di Vicenza and Veneto Banca that now belong to Amco). Ffauf, the Luxembourg holding of the Bragagnolo Family, the company’s controlling shareholder, has also debts of 50 million with Bank of China. Further owners of Pasta Zara are Friulia (11.25%) and Simest (11.76%). Amco is a full-service credit management company of the Italian Ministry of Economy and Finance that received from Fitch Ratings a BBB- Long-Term Issuer Default Rating (IDR) and an F3 Short-Term Foreign-Currency IDR with a stable outlook. Sign up here for BeBeez Newsletter about Private Debt and receive all the last 24 hours updates for the sector.

Stelbi, an Italian hydrothermosanitary company, is going to list on Milan market a one million euros bond for supporting its organic development (see here a previous post by BeBeez). Raffaele Stella and Loredana Bianco founded the company in 1991. In 2019, their kids Alberto, Francesco and Maria Elena started to manage the company which has sales of 9.7 million (8 million yoy) with an ebitda of 0.813 million (0.576 million). Sign up here for BeBeez Newsletter about Private Debt and receive all the last 24 hours updates for the sector.

Frigomec, an Italian producer of refrigeration systems for the Horeca sector, issued a Milan-listed minibond of 250k euros (see here a previous post by BeBeez). Frigomec will invest such proceeds in its organic development. Frigomec has sales of 2.94 million and an ebitda of 0.228.

The Sardinia Region allocated 6 million euros for supporting local SMEs with minibonds through Sfirs, the regional financial services firm, said Giuseppe Fasolino, the regional councillor for budget (see here a previous post by BeBeez). The Region will invest half of such amount for co-financing enterprises in the productive sectors and prioritize the cork and stone fields.

Epta, an Italian producer of refrigeration system for the big distribution, said that in 2019 it posted sales of 958 million euros (+4% yoy and 726 million generated in the Emea area) and net profits of 33 million (see here a previous post by BeBeez). Marco Nocivelli is the company’s chairman and ceo. In 2019 Epta acquired DAAS (Romania), Kysor Warren (USA), Kysor Warren de Messico, Sofrico (New Caledonia), and Linus Eco (Poland). In September 2017, Epta acquired Libre in Poland, King Richard Shop System (Philipines) and Portanuova (Chile and Peru). In March 2016, Epta carried on a private placement of a 20 million bond that Prudential subscribed through Pricoa Capital Group with a shelf contract that allows the company to issue up to 120 million US Dollars (or equivalent in euros). These liabilities are due to mature in 2023 and pay a 2.30% coupon.

Argo Tractors, an Italian producer of tractors, received a 50 million euros financing from Cassa Depositi e Prestiti and Intesa Sanpaolo (see here a previous post by BeBeez). The facility in in two tranches of 5 and 7 years and will support the company’s organic development. Argo Tractors generates abroad more than 80% of its 450 million turnover.