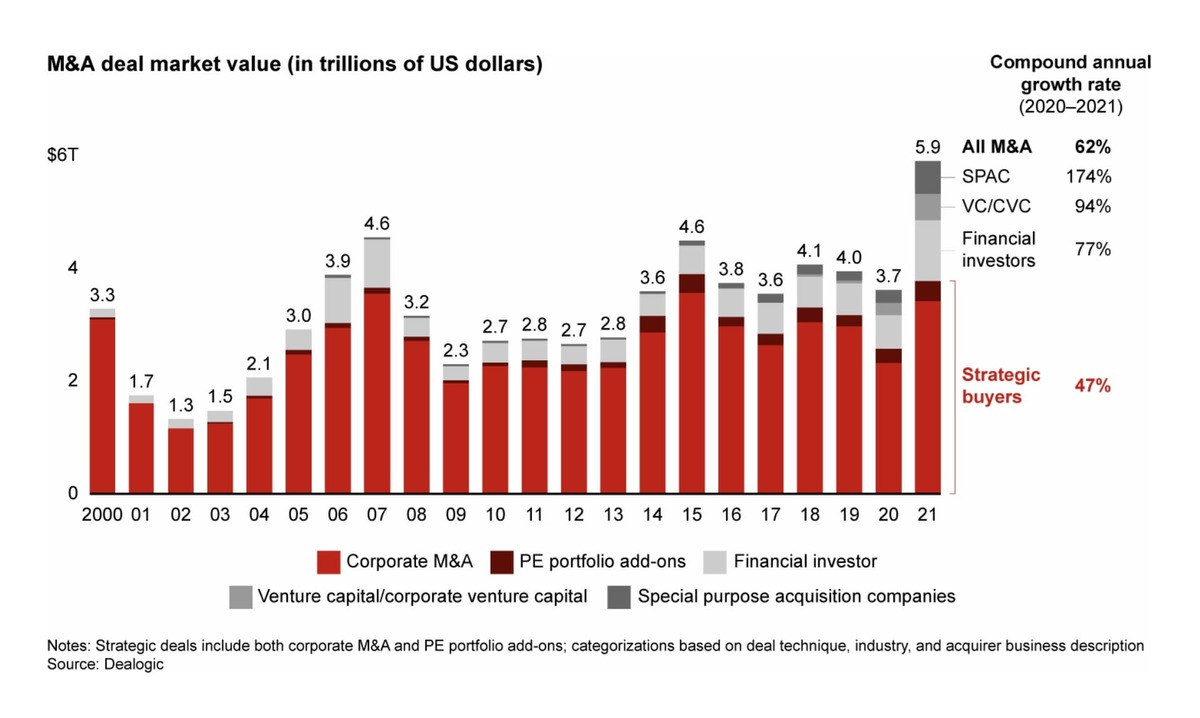 In 2021, global m&a activity has ben rocketing up said reports of KPMG, Bain&Company and PwC (see here a previous post by BeBeez). However numbers are quite different. At the end of January KPMG calculated 48,948 transactions completed for a total value of 4.418 billion dollars, the all-time high both in terms of deals (well beyond the maximum of 37,437 deals in 2017) and in terms of value (well over 3,833 billions of dollars in 2007) (see here a previous article by BeBeez). But a few days ago the data released by Bain & Company were even higher, with the former counting operations for 5.9 trillion dollars and PwC counting deals for 5.1 trillions (+ 59% from 2020) with 62.500 operations announced (+ 24%). In both cases, indicating that this is the best data ever. Bain&Company also said that the median EV/ebitda ratio increased to 15.4X. Regarding the activities of private equity funds, PwC has calculated that in 2021 they reached a share of 39% in volume and 45% in value on the total of 2021 transactions, compared to the respective averages of 26% and 30% of the last 5 years. This is a trend that, according to PwC, is destined to continue also in 2022. In Italy the trend is very similar, with private equity funds covering 38% of total volume transactions and even 56% in value. This estimate is in any case conditioned by the availability of the counter-value data for only 25% of the transactions at the Italian level, compared to 45% at a world level. We recall that BeBeez calculated that in 2021 in italy 40 deals involving private equity firms in Italy have been announced or closed on involving companies with at least a 500 million euros enterprise value where at least 15% of the capital of the target companies was traded. Of these, 24 deals involved companies with an EV of at least one billion.In total, 497 deals were counted in 2021, up by more than 38% from the 360 ​​deals in 2020 and by over 57% from the 317 deals in 2019 (see here BeBeez’s 2021 Private Equity Report, available to subscribers of BeBeez News Premium and BeBeez Private Data). Book a demo videocall for BeBeez private Data here.

Vodafone Italia, a subsidiary of UK-listed Vodafone, attracted the interest  French tlc Iliad who tabled a bid of 11.25 billion euros together with Apax Partners. However Vodafone said in statement yesterday that the offer is not interesting for its shareholders (see here a previous post by BeBeez). Leaks about an 11 billion offer by Iliad, without quoting Apax involvement had spread on the market on Wednesday Feb 9th (see here a previous post by BeBeez). Vodafone Italia has sales of 6.2 billion, an ebitda of 1.5 billion and net cash of 32.3 million. Iliad Italia has sales of 667.6 million, an ebitda of minus 316,3 million and a net financial debt of 0.244 million.

Ardian might fetch about one billion euros (15 – 20x ebitda) out of the sale of Neopharmed Gentili, a pharmaceutical company (see here a previous post by BeBeez). Previous press reports said that the fund has not yet appointed any financial advisor. Milan-based Neopharmed Gentili is born in 2011 out of the merger of Gentili and Neopharmed, two assets that Mediolanum Farmaceutici acquired in 2009 and 2010 and of which sold a controlling stake to Ardian in 2018. The company has sales of above 200 million.

Costa Endutainment, an Italian company that manages theme parks and Genoa Aquarium, attracted the interest of Looping Group, a French portfolio company of Abu Dhabi’s Mubadala (see here a previous post by BeBeez). Oaktree Capital Management could sell its 41% stake that acquired in June 2019. The Costa Family owns 58% of the company. Giuseppe Costa, the company’s ceo and chairman, aims to merge the business with Opera Laboratori Fiorentini, a provider of services for Museums, and hired Pirola Corporate Finance to this end. The transaction attracted the interest of Dea Capital Alternative Funds while Pricoa Capital could provide the financing. Opera Laboratori Fiorentini has sales of 19 million euros, an ebitda of minus 8.1 millioni and a net financial debt of 31.1 million. Costa Endutainment has revenues of 26.7 million, an ebitda of minus 5.8 million and a net financial debt of 35 million.

Quadrivio Group aims to raise 500 million euros for Made in Italy 2 for investing in the sectors of agrifood, fashion, design and cosmetics, ceo Alessandro Binello said (see here a previous post by BeBeez). Quadrivio Group signed a joint venture with Pambianco Strategie d’Impresa in October 2018 for launching Made in Italy. Binello said that before the fundraising closure of the new vehicle, Made in Italy Fund  will list a portfolio asset and sell another company.

Neuberger Berman launched NB Direct Private Equity Fund 2022 Eltif (see here a previous post by BeBeez). The ticket for the European investors interested in the vehicle is of 25k euros. The deadline for pouring money in the Eltif is 31 August, Tuesday. The Eltif has a tenure of 8 years, but the board of directors of Neuberger Berman can extend it by a further 3 years.

WRM Group completed the sale of Italian ham producers King’s to Rigamonti Salumificio (part of JBS) for 82 million euros as announced last December (see here a previous post by BeBeez). But here is a news: WRM, the Luxembourg investment company headed by Raffaele Mincione, will continue to invest in the sector through King’s former parent company Kipre, which retains ownership of a number of assets. Actually the sale includes the two historical brands: King’s, founded in 1907 in Sossano (Veneto), and recognized by the Italian government as ” historical brand of national interest “; and Principe, founded in 1945 in Trieste (Friuli-Venezia Giulia). And, together with the brands, it includes the 4 production plants and the entire activity of Principe in the United States. However, the transaction does not involve the ownership of Kipre Holding and Queen’s with two factories and up to 160,000 shares in the Consorzio San Daniele DOP (the consortium of the San Daniele ham’s producers).

Hig Capital acquired the majority of Berardi Bullonerie, an Italian distributor of fastening elements and provider of integrated logistics service, from the eponymous Family who reinvested for a minority (see here a previous post by BeBeez). Hig financed the transaction with a loan of Crédit Agricole, Deutsche Bank and Banca Ifis. Equita Private Debt subscribed a subordinated bond. Berardi Bullonerie has sales of 70.6 million euros, an ebitda of 7.2 million and net cash of 0.376 million. Giovanni Berardi, the company’s ceo, said that that the business could also grow through acquisitions.

Chiron Energy Capital, a renewable energy company, will build four photovoltaic plants in Italy with a power of 21.2 MW (see here a previous post by BeBeez). Chiron will build the plants in the North East of Italy. Mario Pesaresi and his son Paolo invested 10 million euros in 2020 for founding Chiron and respectively own 80% and 20% of the business.

EY acquired Milan-based Key Project, a boutique advisory firm for the management of performance, lean organization, marketing & sales, and digital transformation (see here a previous post by BeBeez). Key Project has sales of 1.5 million euros and an ebitda of 3,000 euros.

F2A, an Italian provider of outsourcing solutions for the HR management and accounting of blue chip companies that belongs to Ardian Expansion, acquired Italian competitors EasyPay and ETAss (See here a previous post by BeBeez). Alessandro Galli and Laura Colombo sold EasyPay (3.3 million euros sales with an ebitda of 1.1 million) and ETAss (0.818 million revenues and an ebitda of 15,000 euros).

Attestor and Oxy Capital hired Lazard for selling Ferroli, an Italian producer of heating and climatization systems, on the ground of an enterprise value of 500 – 550 million euros (See here a previous post by BeBeez). In 2015, Ferroli sold a 60% to Attestor and Oxy  and signed a debt restructuring agreement with the funds, Mps, Banco Bpm, Crédit Agricole, Deutsche Bank, Intesa Sanpaolo, Sparkasse, Unicredit, and Amco. The Ferroli Family kept a 40% of the company who has an ebitda of 40 million euros and sales of 400 million.

Simest, part of Cdp, and Fondo di Venture Capital (FVC) subscribed a 4 million euros capital increase of Bronte Administracao e Partecipacoes, the Brazilian subsidiary of Bomi, an Italian provider of logistic services for the biomedical sector that belongs to ArchiMed (See here a previous post by BeBeez). Bronte will invest the proceeds in the acquisition of local competitors Line Express and Alx . In 2019, ArchiMed invested 73 million euros for delisting Bomi from Milan market.

Tamagnini (FSI), here is how you become the biggest fintech investor in Italy. The private equity fund invested 600 mln euros in the sector since 2018 and more is to come