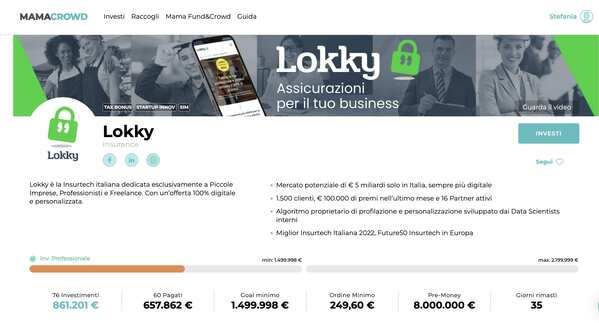 Lokky, an Italian digital insurance broker for micro-entreprise, professionals and freelanceres that ceos Paolo Tanfoglio and Sauro Mostarda founded in 2019, raised 2.6 million euros through an equity crowdfunding campaign on Mamacrowd platform (see here a previous post by BeBeez). Lokky concluded with a 70% overfunding the campaign that started on the ground of a pre-money value of 8 million. The company raised a total of 2.9 million through a capital increase and 5 million since its birth.

Serenis, a tech company for mental wellness that Silvia Wang founded, raised 2.7 million euros from FG2 and other investors (see here a previous post by BeBeez). Earlier in June, Serenis closed another 2.6 million from FG2 Capital and other players. Since its birth, the company attracted a total of 6.5 million.

LIFTT, an incubator that Compagnia San Paolo and Turin Polytechnic University founded in 2020, invested in Italian photonic companies Subphoton (750k euros) and CareGlance (250k euro) (see here a previous post by BeBeez). In early 2023, LIFTT could launch a 40 million capital increase and pour further resources in Subphoton, a company that Daniele Androni founded in 2019 with other partners. CareGlance is a deeptech startup that Maria Chiara Ubaldi founded in 2019.