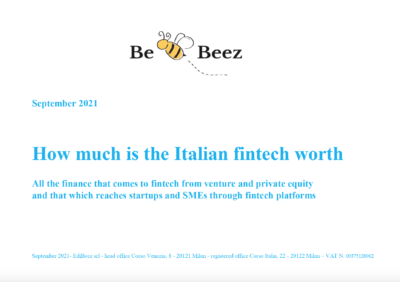 In the eight months since the beginning of the year, fintech lending platforms that finance Italian SMEs (including real estate projects) have almost reached 2.2 billion euros and a total of around 7.2 billions since the start of operations of the various platforms, with the first ones starting operations between 2015 and 2016 (see here the last Fintech Report by BeBeez, available to subscribers of BeBeez News Premium and BeBeez Private Data). In the meantime, equity crowdfunding is also growing and at the end of August the Italian platforms had almost reached 100 million euros in equity funding, both for companies and investment vehicles and for real estate projects, according to CrowdfundingBuzz data. All in all, then, this means a total of 2.3 billion euros of capital channeled to companies through fintech platforms. At the same time, BeBeez Private Data also shows that Italian or Italian-founded fintech startups and scaleups have raised as much as 855 million euros from venture capitalists since the beginning of the year, a figure that is already well above the 780.5 millions raised in all of 2020 by all startups and scaleups, not only active in the fintech sector, but in any sector.

Franco Mignemi, the founder of alternative investments platform Elviria, said to BeBeez that Italy is a strategic market for the company (see here a previous post by BeBeez). The blockchain technology of Elviria allows to tokenize investment funds, commodities, company capital, art items, and real estate projects. The investor can trade the issued tokens on all major centralised platforms and in OTC transactions. Elviria is interested in the origination of start-ups, private equity and m&a. Since 1 September, Elviria is carrying on the preliminary analysis of potential projects with the potential for international scale up. The investment focus from a sectoral point of view is on 4 areas: fintech, luxury & made in italy, technology and med/healthcare. The investment focus is on fintech, luxury & made in italy, technology, and med/healtcare.

Unicredit is working on the launch of a fintech platform as part of the business plan that the bank will release in November (see here a previous post by BeBeez). Jingle Pang, the group’s digital & information officer, will head the project with the support of Lu Yu, Daniele Tonella,  Stefan Vogt, Gema Baguena, and Stefano Frascani.

Hype, an Italian challenger bank that belongs to Milan-listed Illimity and Fabrick, aims to generate profits in 2023, ceo Antonio Valitutti said (see here a previous post by BeBeez). Hype aims to have 3 million clients by 2025 from the current 1.5 million.

Italian digital agency Fornace launched Fool’s Tools an online tool for managing cryptocurrencies (see here a previous post by BeBeez). Francesco Frapporti and Luca Cisorio founded Fornace in 2011. In addition, the agency launched TEST, its cryptocurrency that reached a market capitalization of 16 million US Dollars from an initial value of 300 US Dollars in three weeks.

On 24 September, Friday, Cue Health, the California-based medtech, launched its ipo on Nasdaq at 16 US Dollars per share, while at the closure of trading the market capitalization was up 25% or in the region of 2.9 billion (See here a previous post by BeBeez). Italy’s venture capital Alchimia fetched a 30x cash multiple as it invested in Cue Health in April 2018 on the ground of an enterprise value of 50 million.

Alchimia also acquired 34% of influencer marketing firm Stardust for supporting the international expansion of the business (see here a previous post by BeBeez). In 1H21, Stardust generated sales of 4.6 million euros. Simone Giacomini is the company’s ceo. Paolo Barletta, Alessio Vinciguerra and Lorenzo Castelli founded Alchimia in 2018. The fund invested more than 40 million euros in 22 portfolio companies. In late 2020, Nicola Bulgari raised his stake in Alchimia from 12% to 17.5%.

Exein, a cybersecurity for Internet of Things  scaleup, attracted 6 million euros from Future Industry Ventures, eCAPITAL, United Ventures, and other investors (see here a previous post by BeBeez). Gianni Cuozzo founded eCAPITAL in July 2018. Exein will invest the raised proceeds in expanding its activity to the medical and automotive sectors.

The Italian network of home restaurants Cesarine.com received 1.1 million euros from the Cazzola family and Cdp Venture Capital – Fondo Nazionale Innovazione (see here a previous post by BeBeez). Sources told BeBeez that the company is still fundraising and issued a bond worth up to 3 million that will convert into equity in 2024.

Unyli, a B2B e-commerce platform for lingerie, launched an equity crowdfunding for raising 300k euros on the portal 200Crowd (see here a previous post by BeBeez). Trentino Sviluppo will subscribe 5% of the amount that Unyli aims to raise. The company already attracted 0.112 million from 5 investors on the ground of a pre-money value in the region of 2.2 million ahead of the deadline of 19 November, Friday. Retail Capital, a startup that Valentina Fabbri and Vanessa Fiore founded with the support of Francesco De Paolo, launched the brand Unyli which created a win-win system for brands, shops and consumer through a phygital multichannel business model. The company previously received the support of Le Village by Crédit Agricole Milano and has sales of 0.1 million.

Wikicasa.it, a provider of real estate information that belongs to networks Gabetti, Tecnocasa, Re/Max and Tempocasa, acquired Casaclick.it, an Italian portal for real estate adverts, from Prelios (see here a previous post by BeBeez). Wikicasa has 12 million unique visitors per year and provides big data for easing and speeding the real estate transactions. Wikicasa will also allow Prelios’ AVM Premium to access data-based asking prices for its programme for assets appraisal. The companies will also luanch a marketplace for distressed assets.

Sources said to BeBeez and CrowdfundingBuzz that Esperia Investor, an investment holding of Emiliano di Bartolo and Antonio Ferrara that targets early-stage startups, acquired 43% of Recrowd, an Italian platform for real estate lending crowdfunding (see here a previous post by BeBeez). The sources said that one of the earliest investors sold the stake. Gianluca de Simone (ceo), Simone Putignano (cfo), Massimo Traversi (coo), and Massimo Mereghetti (business influencer) founded Recrowd in 2019. The company joined the incubator Speed MI Up, part of Bocconi University, in February 2019. In August 2019, Recrowd raised 0.419 million euros through an equity crowdfunding campaign on Opstart on the ground of a pre-money value of 3 million. Recrowd has a turnover of 0.4 million and net profits of 60,000 euros.

Club degli Investitori awarded Antonella Grassigli of the Premio Business Angel dell’Anno 2021 (see here a previous post by BeBeez). Grassigli beaten the competition of Andrea Febbraio, Armando Biondi and Marco Valta. Enrico Chiapparoli, the ceo of Barclays Italy, chaired the jury of which Valentina Magri, a journalist of BeBeez, has been part. Grassigli is the ceo and cofounder of Italian equity crowdfunding platform Doorway, a startup fintech born in 2018.