The first half of the year closed with a super activity on the m&a front at a global level (see here a previous article by BeBeez). PwC data indicate a growth of 30% in terms of the number of transactions compared to the first half of 2020 for a total of 28,939 deals and a value of almost 2,500 billion dollars, more than double compared to the first half of 2020. A little more contained are the data from PitchBook, which instead indicate a value of “only” 2.097 billion dollars spread over 17,808 deals compared to 3.258 billion and 25,828 deals for the whole of 2020. As for the valuations, PitchBook calculates that in terms of ebitda multiples they have fallen slightly below 10x compared to those of 2020 around 10x and those of 2019, just above that threshold. But let’s remember that things change a lot geographically. As already reported last week, for the first time in a decade in 2020 there have been significant divergences in buyout multiples between Europe and the US, with European prices dropping to a 7-year low, while valuations in the Usa have reached new highs (see here a previous article by BeBeez). In Europe, therefore, most of the transactions were closed on the basis of valuations with multiples between 10 and 14.9x the ebitda, while in the Usa there was a record percentage of deals with multiples between 15 and 19.9x. It is also true that valuations vary a lot from sector to sector and that by far the most expensive is tech, in all its forms, with a median multiple of 20.1x in 2020, for a range that goes from 10 to 27x. To understand the extent  of tech deals valuations, just take a look at the list of unicorns compiled in real time by CB Insights.  Well, since the beginning of the year till the end of July, 291 companies have joined the list for an overall valuation of 526 billion dollars, out of a total of 779 companies that make up it all and which together are worth 2,505 billion dollars. In all of 2020, however, only 116 companies had entered the list for a total valuation of 298 billion. And of the 291 new entrants, only 60 do not belong to the tech sector. Obviously, all this has behind a fervent investment activity by large venture capital and private equity funds. PItchBook also says that in 1H21, delisting transactions amounted to 11.3 billion euros, laying the foundations for 2021 to be classified as the year with the highest deal value of this type for 10 years (see here BeBeez Insight View about Delisting in Italy of last 28 June available for the subscribers to BeBeez News Premium and 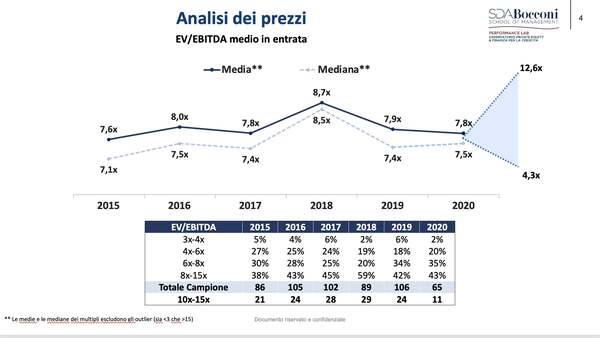 to BeBeez Private Data) (see here a previous post by BeBeez). As for Italy, Osservatorio Private equity &Finanza per la Crescita of Milan-based SDA Bocconi, a think tank that professor Valter Conca heads, said that in 1H21,  market participants closed 789 m&a transactions in Italy (private equity closed 253 deals) (see here a previous post by BeBeez). Such data are in line with those of BeBeez 1H21 Private Equity Report available for the subscribers to BeBeez News Premium and to BeBeez Private Data. The report says that in 1H21, private equity investors closed 236 deals (64% of the whole 2020).

De Cecco, the Italian food company of the eponymous family, attracted the unsolicited interest of Spanish private equity ProA Capital and other financial investors for a minority ahead of a listing (see here a previous post by BeBeez). De Cecco belongs to the chairman Filippo AntonioDe Cecco (23.59%), Saturnino De Cecco (23.41%), Giuseppe Aristide and his daughters (12-04%), Giuseppe Alfredo De Cecco and his kids (10.50%), Maria De Cecco (Saturnino’s sister) 9.92%. Further 8 members of the family have stakes ranging between 4% and 5%. The company has sales of 510 million euros, an ebitda of 64.6 million and net profits of 21.1 million. De Cecco’s enterprise value could amount to 360 – 420 million.

Cinven called off the sale of Eurovita, the insurer that the fund created between 2016 and 2019 out of the merger of Ergo Previdenza, Old Mutual Wealth Italy (fka Skandia), Eurovita Assicurazioni, and Pramerica Life (see here a previous post by BeBeez). Cinven expected to fetch 600 – 700 million euros, but since it attracted lower bids it could carry on a GP-led fund restructuring transaction through the recapitalization of the asset.

QuattroR invested 100 million euros for acquiring a 49% of Consorzio Casalasco del Pomodoro (CCP), an Italian producer of tomato sauce on the ground of an equity value of above 200 million (see here a previous post by BeBeez). CCP, which owns the brands Pomì and De Rica (acquired from Generale Conserve), aggregates 550 companies that supply sector players. spa, azienda italiana specializzata in conserve alimentari. QuattroR kept in his role the coo Costantino Vaia and the management team. CCP has a turnover of 338 million (70% export), an ebitda of 34.3 million and net profits of 2.07 million.

The auction for Covisian, a provider of contact center services, gained again momentum and attracted the interest of  some private equity firms, with Capza among them (see here a previous post by BeBeez). At the end of 2015, Aksìa Capital created Covisian out of the merger of Contacta and Visiant Contact whose vendors reinvested for a 45% stake. Since then Covisian acquired, among others, Unitono Contact Center, Uniglobal Insurance Mediation, Avanza Colombia, and Avanza Assicurazione from Avanza. Covisian has sales of 337 million euros, net sales of 331 million, an ebitda of 21.8 million and a net financial debt of 52.8 million.

Vam Investments has acquired, through the newco Slam.com spa, the corporate assets of Slam spa (now renamed Fin 01 spa), an Italian sailing wear brand wholly owned by Finsea, which in turn is an holding company 50% controlled by the Genoese Negri and Clavarino families and mainly active in transport and logistics. Finsea had previously invested in Slam in 2013 acquiring an initial stake of 30% and then rising to 100% in the following years. Vam Investments has appointed Enrico Chieffi as the new ceo of Slam,  (see here a previous post by BeBeez). Mr. Chieffi is a well-know sailorman. Among other things he competed in the America’s Cup in the role the tactician aboard Raul Gardini’s Moro di Venezia in 1992.

Gaea, the fund that Swiss Copernicus Wealth Management handles, acquired from the Zecchin family a controlling stake of CPA (Centro Produzione Abbigliamento), the owner of fashion brands Pence 1979 and Work and Fashion (see here a previous post by BeBeez). CPA has sales of 3.5 million euros and an ebitda of minus 0.915 million. Dora Zecchin, the daughter of the company’s founder Otello, is the ceo of CPA and the coo of Pence1979.

Enel finally sold its 50% of Open Fiber, the FTTH (Fiber To The Home) network. Cdp Equity (who already had 50%) bought a 10% stake, while Macquarie Asset Management bought a 40% stake. The deal was on the ground of an equity value of Open Fiber of 5.3 billion euros (see here a previous post by BeBeez). Cdp Equity paid 530 million for its 10% and for getting a 20% of the shareholders loan facility that the target received from Enel. Macquarie received its 40% of the asset for 2.12 billion. Enel cashed 2.65 billions while it invested 2.5 billion for creating Open Fiber in 2016.

VeNetWork, a club deal platform, acquired from the Foggiato family the majority of Reply, an Italian producer of metal components for specs, jewels, fashion items, and medical devices (see here a previous post by BeBeez). Reply has sales of 4.3 million euros with an ebitda of 1 million and net cash of 1.3 million.

Reden Solar, a French producer of photovoltaic energy that belongs to Infravia Capital Partners (57%) and Eurazeo (43%), won the auction for acquiring a pipeline of 160 MW power spread over 14 Italian solar projects (see here a previous post by BeBeez). Earlier in June, Reden’s owners hired Citigroup and Nomura for selling the company on the ground of an enterprise value of 2 billion euros and an expectd ebitda of 140 million.