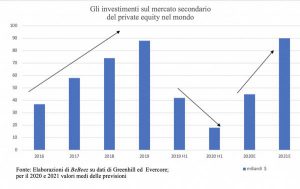 Private equity secondary market, after plunging globally to just 18 billion dollars in mid-2020 in transactions on shares of private equity funds or portfolios of funds from around 42 billions in H1 2019 (see here the press release on the semi-annual report of the advisor Greenhill and here the article by Secondaries Investor on the report of the advisor Evercore),  should have closed the year at just around 40 billions, but this year things will be very different and the secondary private equity market might even more than double investments and break the record of 88 billions touched in 2019. This is what stated in recent days by Philippe Patschkowski, a managing director of Neuberger Berman, speaking at Solving, the forum on the prospects on the markets of the various asset classes organized at the beginning of each year by the US manager, one of the main investors in private and alternative assets with a total of 85 billion dollars at the end of 2020 (see here a previous post by BeBeez). Christian Böhler and Christiaan Van der Kam of Unigestion and Julien Gervaz, the ceo of fintech marketplace for private equity funds Palico, depicted such trend in previous interviews with BeBeez.

BC Partners hired Tifosy, the British crowdfunding platform for sport teams, as advisor for the acquisition of a stake in the Italian football team InterMilan (see here a previous post by BeBeez). Gianluca Vialli and Fausto Zanetton founded Tifosy  and appointed Marco Re for heading the Italian bureau. Inter Milan needs resources for supporting its working capital and refinancing its 375 million euros bond due to mature at the end of 2022. BC Partners is holding exclusive talks with Suning, the majority owner of Inter which is also of interest to EQT, Arctos Sports Partners, Ares Management Corporation, and Temasek Holdings.

On 4 February, Thursday, Lega Serie A, the Italian soccer premier league, will hold a meeting for making a decision about the bid of CVC Capital Partners-Advent International-FSI (See here a previous post by BeBeez). The funds aim to invest 1.7 billion euros for a 10% of a media company that would own the TV rights of the 20 clubs of Lega Serie A.

Troubled Italian bank Montepaschi is attracting the renewed interest of international private equity funds Cerberus, Fortress and Apollo (See here a previous post by BeBeez). Bain Capital, Fortress and Apollo were previously interested. Unicredit is also reportedly considering the acquisition of the bank while trying to sell to AMCO distressed credits for 14 billion euros for easing the merger. AMCO could also buy from Mps a portfolio of distressed credits. Atlas Merchant, Warburg Pincus and BC Partners previously tabled bids for the bank in the region of 2.5 billion.

Stock price of the Italian energy company Erg were up last week on rumours of a possible sale of the hydroelectric and gas assets are boosting ERG’s market capitalization. Mediobanca and Rothschild are advising for this sale  (see here a previous post by BeBeez).  At the end of Q3 2020ERG’s hydroelectric activities generated a turnover of 86 million euros with an ebitda of 58 million, while the revenues of the natural gas activities amounted to 277 million with an ebitda of 51 million. ERG could fetch one billion out of this sale. The assets are of interest to A2A, Enel,Engie, F2i’s Sorgenia, and Macquarie Infrastructure. Erg could invest the proceeds of this sale for expanding its activities in the sectors of wind and solar energy.

Investindustrial hired Rothschild for handling the sale of Italian luxury shoe producer Sergio Rossi (see here a previous post by BeBeez). Investindustrial invested in the region of 100 million euros for acquiring Sergio Rossi from Kering in 2015 on the ground of an enterprise value of 70-80 million. Sergio Rossi has sales of 66.5 million, an ebitda of minus 1.6 million, net losses of 15.8 million, and operative losses of 1.6 million. Andrea Morante and Riccardo Sciutto are the company’s chairman and ceo since 2016.

Apax Partners France is sounding the ground for selling its 61.5% of Italian management consultancy firm Bip (see here a previous post by BeBeez). Apax acquired Bip in 2014 from Argos Soditic which financed the MBO that Nino Lo Bianco and othe directors launched in 2014. Apax acquired a controlling stake of Bip in 2018 for 200 million euros and committed to invest a further 100 million for supporting the firm’s organic growth and M&A transactions.

On 22 January, Friday, Consob, the Italian stock market regulator suspended for up to  15 days the approval of the bid of Toronto-listed ATS – Automation Tooling Systems for CFT, a producer of machinery for the food industry  which had been listed thanks to the business combination with a SPAC (see here a previous post by BeBeez). Consob made such a decision on the ground of the Golden Power rule, that aims to protect from foreign bids the assets that are strategic for the Italian economic system. CFT  has sales of 254 million euros with an ebitda of 17.5 million. In December 2020, ATS launched an offer on CFT at 4.60 euros per share or 88 million. CFT chairman Roberto Catelli and ceo Alessandro Merusi own 38.5% of the company and 60.6% of the voting rights and accepted ATS offer.

In 2020, RINA a provider of auditing and quality control services for the sectors of infrastructures, transports and industry, posted revenues of 485 million euros, below the target of 500 million euros that the ceo Ugo Salerno set one year ago (see here a previous post by BeBeez). The ceo said that the company could list in a couple of years. This year the company set a turnover target of 530 million, an ebitda of 60-65 million, and debts below 2.2X ebitda. E

NEIP starts the auction for its 60% of AltaNova Group, a provider of services for testing and monitoring of electric systems (see here a previous post by BeBeez).  GCA Altium is advising the vendors for such a sale on the ground of an enterprise value 80 million euros. Oaktree, Fondo Italiano d’Investimento (FII), Whitebridge, and Tikehau Capital have received the dossier. AltaNova Group was born in April 2017 out of the merger of ISA Advance Test and Monitoring Solutions (an asset of the CaliniFamily and of ceo Gino Amadi) and Techimp (a spin-off of Bologna University born in 1999). NEIP was born in April 2019 as a spin-off of the private equity team of Banca Finint.

Autotorino, an Italian car dealer, acquired Trivellato Auto, an Italian vendor of Toyota and Lexus cars with sales of 37 million euros (see here a previous post by BeBeez). The Italian antitrust authority and Toyota Italia authorized the transaction. Plinio Vanini heads Gruppo Autotorino which merged in 2019 with Autostar, whose head is Arrigo Bonutto, and created a group with sales of 1.24 billion, an ebitda of 40.9 million and a net financial debt of 118 million.  Autotorino is an issuer of minibonds (see here a previous article by BeBeez).

Colosseum Dental Group (CDG), a Scandinavian network of dental clinics, raised to 100% its 70% stake in Italy’s competitor  Odontosalute (see here a previous post by BeBeez). CDG also acquired French Dentelia from Otium Capital, the family office of Pierre-Edouard Stérin, and the founder Alexandre Attia. CDG belongs to Swiss Jacobs Holding since January 2017 and has a turnover of above 650 million euros.

Poste Italiane acquired 51% of Hong Kong-based Sengi Express Limited, a provider of cross-border logistic services to Chinese e-commerce firms active in the Italian market (see here a previous post by BeBeez). The closing should take place by the end of 1H21. Sengi Express has sales in the region of 80 million euros.

BC Partners valuing FC Inter less than 900-950 mln euros. Suning looks for other investors. Here are alle the names in the game