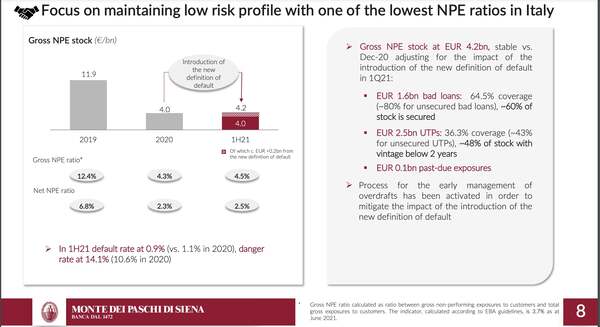 Non-performing exposures and stage 2 credits of Italian bank Montepaschi attracted again the interest of AMCO, the Italian investor in distressed credits which entered officially the virtual dataroom, joining UniCredit and Mediocredito Centrale (see here a previous post by BeBeez).  Last March also Apollo Global Management had entered the dataroom, ma last June Unicredit won exclusive talks with Mps in order to help the Italian Treasury, owning a 68% stake in the bank, to sell it. However, Unicredit is not acquiring NPEs on the books of Montepaschi, so that’s why AMCO entered the game. Unicredit also is not interested in buying about 150 selected branches of MPs, so that’s why MCC is  moving up.

The European Guarantee Fund (EGF), a programme that the European Investment Bank (EIB) launched in April 2020, will also warrant the tranches of synthetic securitizations, the European Commission said on 16 August (see here a previous post by BeBeez). All the EU countries can join the EGF. However, only the following countries decided to provide a further warranty for the programme: Austria, Belgium, Bulgaria, Croatia, Cyprus, Denmark, Finland, France, Germany, Greece, Ireland, Italy, Lithuania, Luxembourg, Malta, The Netherlands, Poland, Portugal, Slovakia, Slovenia, Spain, and Sweden. The programme has 1.4 billion euros and grace to the warranty facilities may allow the SMEs that are facing the coronavirus-related turmoil to borrow 13 billion. The EGF aims to provide the SMEs of the 22 participant countries with resources of 200 billion.

On 25 August, the Italian Government created the Register of non-possessory pledges for non-real estate assets (see here a previous post by BeBeez). Such a reform will allow Italian SMEs to provide collateral for credit applications more easily. This was a much awaited move as the law allowing pledges for non-real estate assets had been published back in 2016 but asked that a specific register would be created to list all the pledges. As such register had not been created till now, that law was completely unuseful.

Intesa Sanpaolo launched S-Loan Climate Change, a financing facility programme for those SMEs that aim to fight the climate change (see here a previous post by BeBeez). SACE will provide a warranty of 80% for S-Loan Climate Change that will finance green investment projects with facilities worth up to 15 million euros and an up to 20 years tenure. Companies with a turnover of up to 500 million can apply for such a programme.

Società Agglomerati Industriali Bosi (Saib), a producer of raw and faced chipboard panels, received from Banco BPM a 12 million euros financing facility for which SACE provided a green warranty (see here a previous post by BeBeez). Saib will invest such proceeds for increasing its production capacity through the installation of a new drying plant, which will also reduce pollutant emissions. The Rinaldi-Conti family owns the company. Saib has sales of 118.1 million, an ebitda of 20.4 million and a net financial debt of 45.9 million.

Gruppo Ceccato borrowed two financing facilities from Banca Mps (see here a previous post by BeBeez). Ceccato Automobili received a 5 million facility and Negro Automobili Due a one million loan. Sace’s Garanzia Italia provided a warranty for both liabilities. Ceccato has sales of 467 million, an ebitda of 16.4 million and a net financial debt of 80.8 million. The company will invest the raised proceeds for opening further car dealerships and in consolidating its working capital.