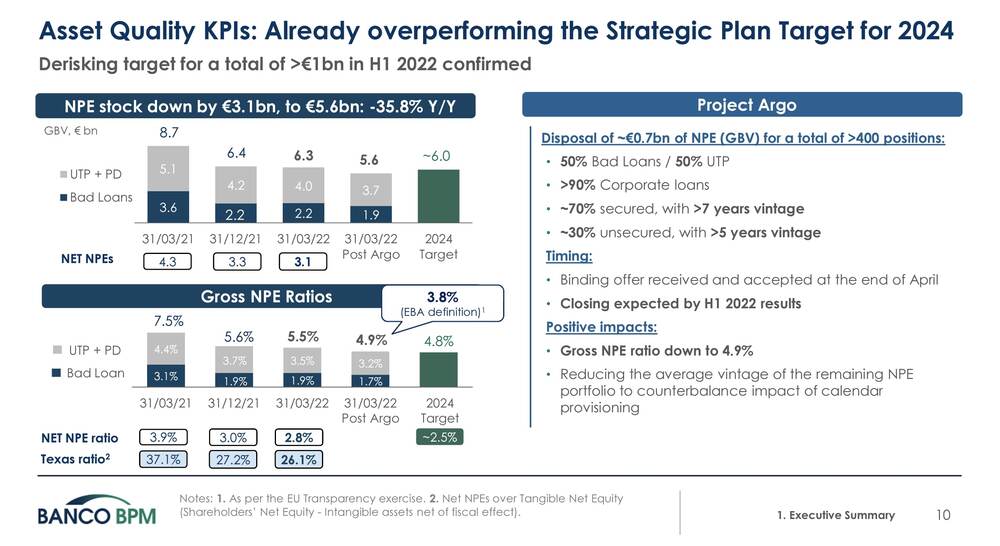 Milan-listed Banco BPM launched Progetto Argo, a derisking project consisting of the sale of a portfolio of UTPs and Npls with a book value of 700 million euros (see here a previous post by BeBeez). Elliott, the controlling shareholder of master and special servicer Gruppo Gardant, will subscribe to the mezzanine and junior notes of the securitization. Banco BPM has 30% of Gardant Liberty Servicing, a joint-venture for the credit recovery sector signed with 70% owner Gardant. The sale of this portfolio may lower from 5.5% to 4.9% the 1Q22 NPE ratio of Banco BPM

Milan-listed illimity Bank carried on the securitization of a portfolio of NPLs with a face value of 475 million euros that the firm acquired from other competitors between 2018 and 2021 (see here a previous post by BeBeez). Secured credits that have residential and non-residential assets as their underlying (respectively 30.4% and 69.6% of the total value of real estate) make 48% of the portfolio. The securitization vehicle issued senior notes for 81% of the face value and subordinated notes for 19%. Illimity subscribed to 5% of mezzanine and junior notes and all the senior notes with an investment grade (BBB) rating. Other investors acquired the remaining mezzanine and junor notes. Corrado Passera, the ceo of illimity Bank, said to BeBeez that “In 2022, the supply chain crisis, the sudden increase of commodity prices and energy costs due to Russia’s invasion of Ukraine will increase the stock of impaired loans on Italian banks’ books, adding to the previous NPEs that lenders already had after the coronavirus emergency. The stock of UTPs will be the first to increase. However, I see that Italian companies are proving resilient. Our credit system is solid and will be able to handle this increase in problematic credits. Passera was speaking on the sidelines of Burning Innovation, a Milan event of Endeavor Italia and B Heroes .

BPER is mulling for a sale of its NPEs management platform, ceo Piero Luigi Montani said during the analysts presentation for 1Q22 (see here a previous post by BeBeez). The bank’s gross NPEs amount to 4 billion euros, down 0.4% from the end of 2021, while the gross NPE ratio is of 4.9%. Montani also pointed out that the bank will keep its derisking strategy. In 1Q22, the net NPE ratio of BPER is 2% with a 60.6% coverage ratio (60.4% at the end of 2021).

Gruppo de Nora, an Italian Industrial company, refinanced its current liabilities with a credit line of 200 million US Dollars and another 100 million for its US subsidiary (see here a previous post by BeBeez). De Nora received both the facilities from BNL, Banco BPM, Intesa Sanpaolo, Mediobanca, UniCredit, and Banca Popolare di Sondrio. De Nora will invest such facilities in its working capital. The company belongs to Milan-listed Snam (36%) and the De Nora Family (64%). It has revenues of 616 million euros (500 million in 2020), an ebitda of 121 million (81 million), net profits of 66 million (33 million), and net financial debt of 189 million. See here the 2021 statement of De Nora available for the subscribers to BeBeez News Premium and BeBeez Private Data, the Database that BeBeez developed with FSI.

Lattebusche, an Italian cooperative manufacturer of dairy products, received from Unicredit a six-year green loan of 5 million euros with the warranty of Garanzia Italia SACE (see here a previous post by BeBeez). Furthermore, the company committed to increasing its support to local charities and the employees’ satisfaction index for the next three years. Modesto De Cet and Antonio Bortoli act as chairman and coo of Lattebusche, which has sales of 107.6 million, an ebitda of 4.7 million and a net financial debt of 45.4 million. This loan is part of UniCredit’s Futuro Sostenibile programme. The companies that borrow such resources pay a lower interest upon achieving ESG targets.

Riello Investimenti Partners‘s private debt fund Impresa Italia subscribed to a 5 million euros minibond of SolidWorld, a developer of 3D technologies for industrial processes (see here a previous post by BeBeez). Sources said to BeBeez that the company made two seven-year issuances of 2.5 million each, for which MCC provided a warranty. Roberto Rizzo founded Solid World in 2003. The company has sales of 55 million and will invest the raised proceeds in its organic development and refinancing its financial liabilities.

OSA, an Italian healthcare cooperative company, received from Unicredit an unsecured loan of 2.5 million euros for which SACE provided a warranty (see here a previous post by BeBeez). The company will invest such proceeds in its organic development. While saving the financial charges on this loan, OSA committed to increasing its activities, especially in home care.

Lisap Italia, an Italian producer of hair care products that Luca Papetti heads, received from Unicredit a four-year loan of 1.6 million euros with the warranty of Garanzia ItaliaSACE  (see here a previous post by BeBeez). The company will invest such proceeds in reducing its production cycle’s direct and indirect CO2 emissions. In November 2021, Lisap acquired from Eleonora Favalini a 75% of the Italian competitor Parisienne Italia. The merged companies aim to generate sales of 65 million. Lisap has revenues of 24.6 million euros, an ebitda of  3.4 million and a net debt of 3.6 million

Earlier in April, Boman, an Italian producer of components of cranes, issued a Milan-listed short term minibond worth 400k euros and carried on a private placement on Fundera fintech platform (see here a previous post by BeBeez). Fondo di Garanzia per le PMI of MCC provided a warranty for 80% of the issuance, part of the programme Master per emittenti seriali of Frigiolini & Partners Merchant. The bond has a 4.2% yield and will mature on 14 April 2023. The company signed a call option for earlier repayment. Boman, a company that belongs to the Bonaudi Family, issued a 0.3 million Milan-listed short term minibond in April 2021. The firm has sales of 11.4 million, an ebitda of little above 0.8 million and a net debt of 5.2 million.

Brunnen Industrie, an Italian manufacturer of wood pellets and chipboards, issued an up to 350k euro minibond and carried on a private placement on Fundera (see here a previous post by BeBeez). The minibond has a 3.5% gross annual yield and will mature in April 2028. The company has a call option for early repayment, and Fondo di Garanzia PMI of MCC provided a warranty for 80% of the issuance. Alberto Dall’Osto is Brunnen Industrie’s majority owner. The company has sales of 23.8 million with an ebitda of 0.7 million and net debt of 4.5 million. This issuance is part of Pluribond Banca di Asti, which already includes Impresa Bacchi’s issuance (1.3 million bond maturing in 2027).