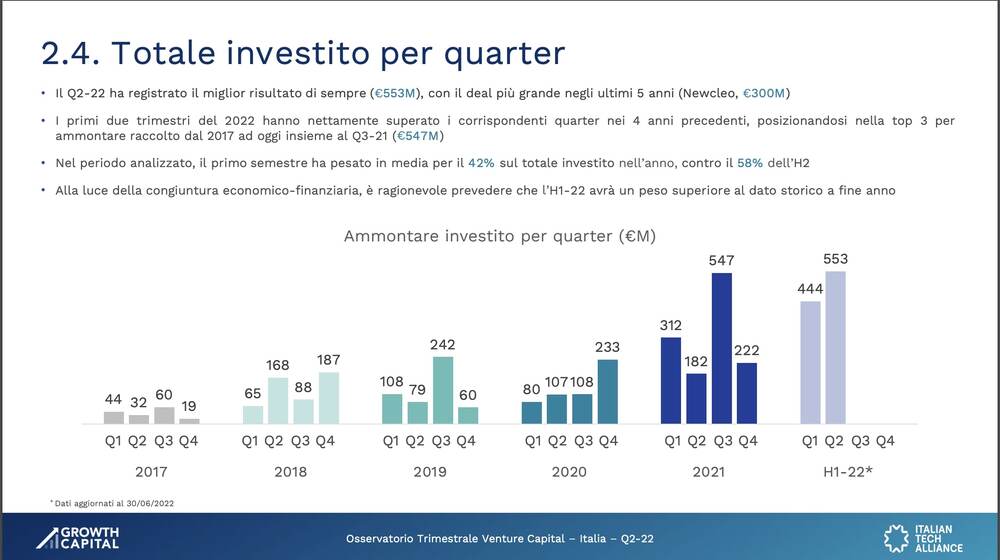 In 2Q22, venture capital investments in Italy amounted to 552.6 million euros as for Osservatorio sul Venture Capital in Italia, a think tank that Growth Capital and Italian Tech Alliance launched (see here a previous post by BeBeez). Preliminary data by BeBeez say the same, while data for Q1 2022 were different as BeBeez monitors venture debt too: so investments were 755 millions as for Beez in Q1 2022 (see here the BeBeez Report fo 1Q22 and Report Venture Capital 2021 BeBeez  available to the subscribers to BeBeez News Premium and BeBeez Private Data), while were just 443,6 millions as for the observatory by Growth Capital and Italian Tech Alliance.

Satispay aims to raise 134 million euros (see here a previous post by BeBeez). New York-based Addition is said will act as lead investor. In November 2020, Satispay raised 93 million on the ground of a pre-money value of 180 millions (post-money 248 millions).

GEDI, the publishing group that belongs to Milan-listed Exor, announced the acquisition of a 30% of influencer marketing firm Stardust, a company that Simone Giacomini, Antonino Maira and Fabrizio Ferraguzzo founded in 2020 (see here a previous post by BeBeez). In 2023-2025, GEDI will have the possibility to increase its stake to 60% – 100%. GEDI bought its stake from Alchimia who had acquired a 34% of Stardust in 2021 and from some business angels. GEDI has sales of 520 million euros, an ebit of 10 million, net losses of 50 million, and a net financial debt of  116 million

Energy Dome closed a bridge round of 11 million US Dollars that CDP Venture Capital sgr led (see here a previous post by BeBeez). The company also attracted the resources of Novum Capital Partners and Sustainable Impact Capital, an investment vehicle of UK’s Barclays. Energy Dome will invest the raised proceeds in its organic development and proprietary technology.

Online grocery Tulips raised 4 million euros (see here a previous post by BeBeez). BeBeez previously reported that the company was planning a 2 million investment round. The company will invest such resources in acquisitions.

Picosats, a spin-off of Trieste University that Anna Gregorio founded in 2014, raised 1 million euros from Progress Tech Transfer, managed by MITO Technology, and  LIFTT (see here a previous post by BeBeez). The company will invest the raised proceeds in testing Radiosat, its proprietary high-frequency ricetrasmettitore satellitare.