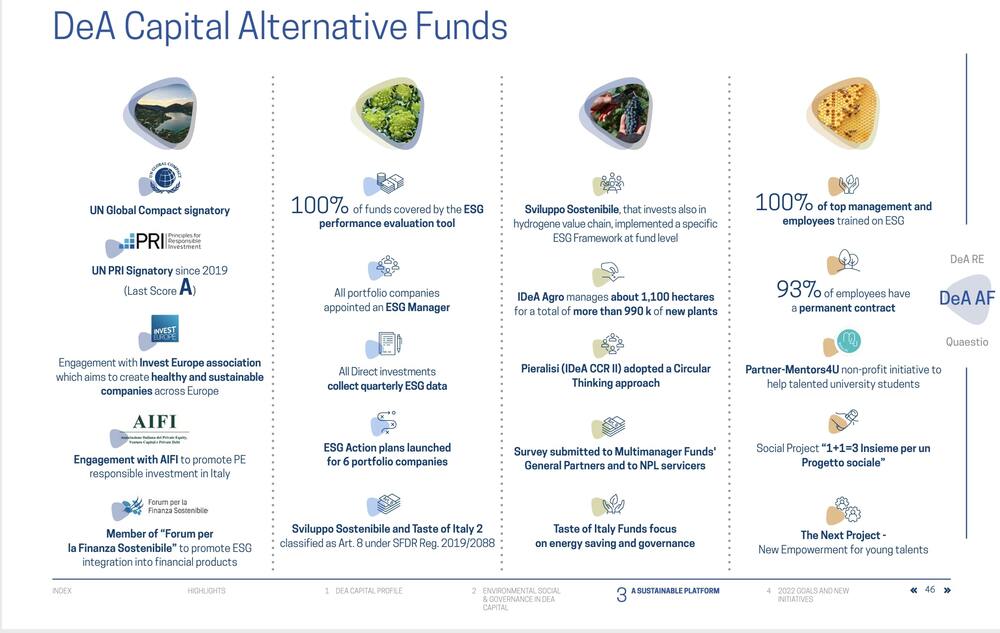 The shipping unit of IDeA CCR II Fund, an investment vehicle in distressed credits that DeA Capital Alternative Funds sgr manages, committed to sell six vessels (five oil, product, chemical tankers and one bulker) with Italian flag to Italian Navigazione Montanari (see here a previous post by BeBeez). The assets are worth in the region of 108 million US Dollars. Euromont (51% of Montanari and 49% Idea CCR II), acquired five tankers for 85 million. Euromont invested 35 million in equity and financed the remaining part with a loan of Illimity Bank and Solution Bank for which SACE provided a warranty. Navigazione Montanari will directly acquire the bulker tank with the support of international investors. Sources said to BeBeez that IDeA CCR II carry on such a transaction for creating value according to the usual canons of private equity transactions supporting portfolio companies and not as part of a restructuring or turnaround strategy. Montanari has sales of 128.8 million euros with an ebitda of 52.5 million.

Deutsche Beteiligungs (DBAG) committed to acquiring a controlling stake of MTW Holding, an Italian producer of metal accessories for high-end fashion items that Bravo Capital created in 2016 (Ssee here a previous post by BeBeez). Mediobanca is reportedly auctioning MTW. The target’s managers will acquire a minority of the business. BlackRock provided the buyers with an unitranche financing facility. Cesare Luzzana is the ceo of MTW Holding which has sales in the region of 60 million euros  with an ebitda of 14 million.

Konrad Jakubowski (who previously worked as a consultant for Parthenon and KPMG) launched Octans Capital, an Italian search fund (see here a previous post by BeBeez). The vehicle attracted the resources of 22 Italian and foreign investors such as William N. Thorndike, Jr, the founder and managing partner of Housatonic Partners, Juergen Rilling, Marc Bartomeus, and Istria Capital, of which Ignacio Olavarria acts as ceo. Octan Capital also attracted the resources of Search Fund Club (SFClub), a vehicle that Enrico Arietti launched with Giovanni Cavallini, Attilio Arietti, and Riccardo Triolo. Octans Capital aims to acquire an Italian company with sales of up to 25 million and an ebitda margin of at least 10% that produces niche items or provides B2B services and operates in nutraceuticals, beauty and sports sectors.

In 1Q22, Milan-listed private equity NB Aurora, a vehicle that Neuberger Berman manages, generated a Net Asset Value of 293.1 million or 11.93 euros per share (288.1 million or 11.73 euro per share in 4Q21) (see here a previous post by BeBeez). The NAV and the book value of NB Aurora’s investments increased since the beginning of the year. In 2020, NB Aurora raised 245 million.

RedFish4Listing (RF4L), a mid-market investor in ipos and pre- ipos, that Redfish launched in November 2021 with initial resources of 1.5 million, launched an up to 3 million capital increase (see here a previous post by BeBeez). Paolo Pescetto is the ceo of Redfish. RF4L invests in companies that have already hired a nomad for the launch of an ipo and screens its target with a big data analytic and systemic scouting with the support of Marinka, an Artificial Intelligence and Neural Link Technology proprietary software.

Cirsa International Business Corporation, a subsidiary of Blackstone Group portfolio company Cirsa, an international gaming company, is close to acquiring Eplay 24 ITA, a Malta-based competitor that operates in the Italian market (see here a previous post by BeBeez). The Italian Antitrust Authority gave its approval. Igame 24 and Noblenoise capital will sell their stakes and sign a 5-year non-competition agreement with Cirsa for the markets where Eplay operates. Antonio Tressanti (ceo) and Carmine Biancospino head Eplay who has a turnover of 1.5 billion euros and 111.5 million of GGR (Gross Gaming Revenue). Earlier in February, the company acquired Italiaonline Gaming from Italiaonline. Blackstone acquired Cirsa in April 2018 from its Spanish founder Manuel Lao Hernandez. The fund financed the transaction with the issuance of bonds for a total of 1.56 billion. In December 2021, press rumours said that Blackstone was mulling for an IPO of Cirsa on the ground of an enterprise value of 3 billion. Cirsa has an operative turnover of 1.12 billion with an ebitda of 331.4 million.

Gruppo Celli, an Italian producer of machines for pouring drinks that belongs to Ardian, acquired Spain’s competitor Reductores Y Variadores Del Sur (Reyvarsur) from the Corbalánfamily (see here a previous post by BeBeez). Juan Corbalán founded Reyvarsur in 1945. Ardian acquired Celli from Consilium Private Equity Fund (70%) and the Celli family (30%) in 2019. Consilium invested in the company in 2013. The company has sales of 130 million.

Equita Smart Capital Eltif, a mid market private equity investor that Equita Capital sgr manages, acquired a 33.3% of Clonit, an Italian developer of molecular tests for infective and genetic diseases (sSee here a previous post by BeBeez). The fund subscribed a capital increase of the target and acquired part of the stakes of the company’s founder Carlo Roccio (90%) and the ceo Dario Russo (10%). Clonit has sales of 6.1 million euros, an ebitda of 2.2 million (an above 30% ebitda margin) and net cash of 32,000 euros. Clonit aims to grow organically and through acquisitions. Equita Capital is currently fundraising ahead of a final 140 million target with the support of Allfunds Bank and other placement agents for the retail distribution.

Fimer, an Italian producer of photovoltaic inverters and electric recharging stations, attracted the interest of corporate turnarounds investors Certina Holding, Germany-based, and UK’s Attestor Capital (see here a previous post by BeBeez). Attestor is currently frontrunning. Earlier in February, the Italian Ministry for the Economic Development said that Fimer needs resources of 70 – 100 million euros. At the end of 2021, the company applied for a receivership procedure with Arezzo Court who extended to 30 June, Thursday, the deadline for presenting a restructuring plan. Filippo Carzaniga is the chairman of Fimer. The company i salso reportedly holding talks with Generalfinance, an Italian provider of specialty finance to companies in distress, for a 15 million bridge financing facility. Fimer’s distress started in March 2020 after it acquired the inverters unit of Swiss Abb whi had sales of 300 million and losses of 9 million. Fimer had sales of 51 million and profits of 1.3 million. Previous reports said that the company also attracted the interest of German turnaround investor Aurelius.

Israel’s Sharon Laboratories announced the acquisition of the ingredients for cosmetics of the Italian competitor B&C and of its research unit CR&D (see here a previous post by BeBeez). B&C, which belongs to the Lampugnani and Vignati families, will focus on its core business and develop ingredients for the food industry. The company has sales of 13.2 million, an ebitda of 1 millio and a net debt of 3 million. Gianni & Origoni and Fineurop Soditic acted as legal and financial advisor to Sharon Laboratories. Dentons provided the shareholders of B&C and CR&D with legal counsel. Tene Investment has one billion dollars of assets under management and in 2017 acquired a controlling stake in Sharhon while chairman Assaf Burstein kept a minority.